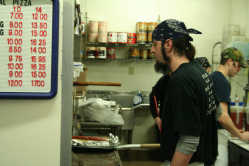 Greg Masten takes a pizza out of the oven at the newly reopened Pizza King.

Howard Thomas, one of the two new owners of the business, said the restaurant opened its doors Tuesday for a soft open, used to help prepare staff for how busy a business will be.

"When the previous owners opened in May of '09 they absolutely got slammed," Thomas said.

"We also had a very nice evening Tuesday," he said.

On Thursday, the Pizza King storefront was busy, with the entire small parking lot taken up and three or four people in the take-out area. Most of the dining room had people in it too.

Occasionally, people offered congratulations on opening the store up again. One woman said, "We missed you," while signing her check.

Matt Jordan, a Greencastle resident said he was happy to have Pizza King back.

"Yeah, it's been a long time," Jordan said. "This is my first time trying it tonight (since it reopened)."

Jordan said he heard about the business reopening from hearsay around town.

Thomas said it didn't take much work to open the old business -- just "cleaning it and a few minor things."

"It was basically turn key ready," he said.

Thomas said the business is returning Sue Watjen as manager and a large portion of the previous staff.

"We're looking to apply for a beer and wine license," Howard Thomas said.

He also said they would be trying to add lunchtime service and improve the parking. Pizza King is currently open from 4 to 10 p.m. Sunday through Thursday and 4 to 11 p.m. Friday and Saturday.