By LUKE HOLT, For the Banner Graphic 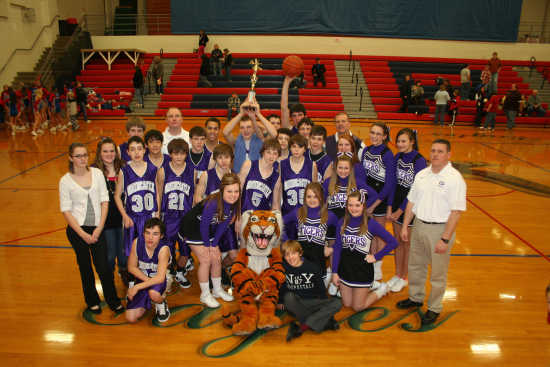 The first few minutes of the game seemed to be played rather evenly. Both teams had a few lead changes.

But soon, GMS would pull away with a 15-6 lead at the end of the first quarter. One of the key components that seemed to be troubling SPMS was the full court press that the Tiger Cubs put together. Many turnovers were created because of the press.

The Tiger Cub's momentum would continue into the start of the second quarter, as the team went on a 16-0 run making the score 27-6. Finally, Berendt Freeman of SPMS ended the Eagle's drought by making a 3-point shot with 2:10 left to play in the half. The score at halftime was GMS 30, and SPMS 11.

Once again, there seemed to be no momentum shift for the Tiger Cubs.

They came out in the second half continuing their vicious full court press, and the Eagles could not seem to find an answer to rebuttal the strong attack. However, it was not only the press that proved troublesome for SPMS, it was the half court defense as well.

And that was pretty much the story of the night, the defense. The Eagles were held scoreless, and the score at the end of the third quarter was 42-11 in favor of GMS.

As the fourth quarter got under way, GMS started out on offense holding on to the ball trying to stall out the time, and secure their lead. However, the Eagles would not give up.

Despite the large deficit, they kept fighting and pouring their hearts out on the court. It just wasn't their night, and their shots were not falling. The Tiger Cubs ended up shutting out the Eagles for the whole entire second half, making the final score of the game; GMS 48, SPMS 11. Along with the county title, the Tiger Cubs were also conference champions.

Both teams played tremendously hard. There is no doubt about the passion that the players had during the game, as it would be the final game for each of the teams' seasons.