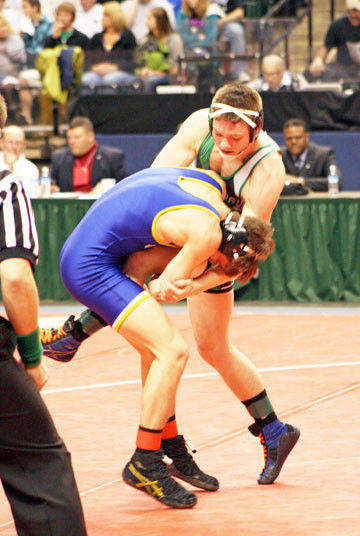 INDIANAPOLIS -- Conseco Fieldhouse. It's the biggest stage when it comes to IHSAA wrestlers and for Cloverdale senior Donnie Helterbrand, it was his moment to shine. Helterbrand advanced to the second day of competition with a deceivingly dominant first round win.

Cloverdale head coach Steve Livingston said his philosophy hasn't changed since the tournament started. Take it one step at a time and focus on the task at hand.

"Obviously coming in we knew we were going to take it a match at a time -- we weren't going to look at what we had to wrestle the second round," He said. (Donnie) went out there, controlled the match -- I would say we got a little lazy in the last 15 seconds and let the guy come back in and make it look a lot closer than the match really was.

"(He) was working hard all week. We had all the guys come in, and like I said when we went to semi-state, our guys wouldn't be as good as they are if it wasn't for the other guys coming in. A lot of props to our team for coming in, those guys could have very easily said 'my season's over and I'm done', but it was nice having a new body on him all week to get him ready," he added.

Helterbrand said his nerves might have been on edge before his match, but now that the first round is under his belt, it's time to get to work.

"It feels great," he said of his win. "It gives me a lot of confidence going into the second round. I was a little bit nervous, but the butterflies are gone and now it's time to rock."

Helterbrand met up with Carmel's Grant Scurria in his opening match. Both wrestlers boasted matching records of 39-1, but Helterbrand was in complete control of the match from the whistle.

Quick moves and diligent control allowed Helterbrand to jump out to a 6-1 lead after the first period. He extended his lead to 8-2 following the second period.

Holding a six-point advantage, Helterbrand continued to control the match, but with the second ticking away, Scurria was able to get a flurry of points late, but it still wasn't enough to deter Helterbrand from his quest for a state title. Helterbrand won the match 12-11 to advance to today's rounds.

Helterbrand will next go against Yorktown's Andrew Hiestand, who has a record of 48-2 after he defeated Mishawaka's Sidney Logan. Though the two haven't met on the mat before, Livingston is confident his wrestler has a good shot at winning and with good reason.

"We get (Andrew) Hiestand next round. We beat a guy last weekend that has beaten him, we've never wrestled him, but that bodes well for us. Obviously our goal was to get here and now that we've made it through tonight, we're going to talk about new goals on the way home," he said.

After spending most of their season in intimate surroundings, the size of Conseco Fieldhouse could seem overwhelming. But for Livingston and Helterbrand it was a matter of keeping things simple.

"We were excited to just get here, but I think Donnie did a great job of keeping his head and not letting it get to him this week," Livingston said. "He knew he had to show up and wrestle and treat it like any other meet. A lot of guys come in here and get caught up in the glitz and glam. We just tried to focus on coming here to wrestle instead of coming in here and looking around and say 'wow, it was great to be here'.

"He came out ready to roll," Livingston said.

When ask how he was able to disregard all the distractions that came along with the state finals, Helterbrand said his time wrestling over the summer helped to prepare him.

"I just went back to when I wrestled in Florida this summer and everybody I wrestled there was amazing. You can't get caught up in that because that can end it right there. You have to be mentally tough and stay strong -- that's what I've tried to do," he said.

The quarterfinals will begin at 9:30 a.m. today, with semifinals to follow. The consolation rounds will kick off at 5 p.m., with the championship round to follow at 7:30 p.m. at Conseco Fieldhouse.