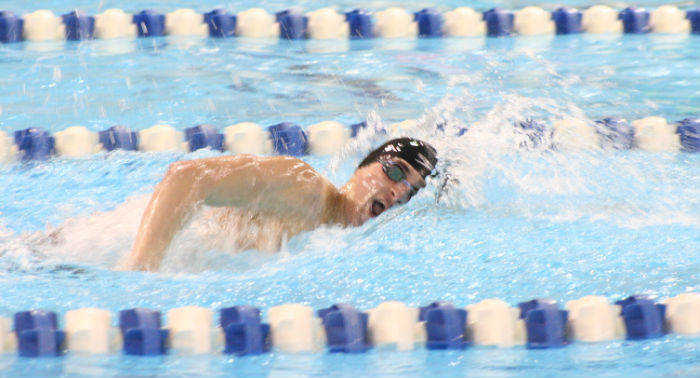 Greencastle senior Jay Guffey pulls away from the competition in the 100 freestyle. Guffey won both the 50 and 100, making the state cut time in each race. He was also on the winning 400 free relay team, along with Jesse Elkins, Mitchell Ball and Walter Chiarella.

Greencastle finished a close second to sectional champion Southmont with 250 points. South Putnam was sixth with 102, with North Putnam in seventh with 88.

GHS senior Jay Guffey won both the 50 freestyle (21.69) and 100 freestyle (48.16), besting the state cut time in each event. Freshman Nash Firebaugh was the Tiger Sharks' other individual champion, taking the 100 butterfly in a time of 53.07.

Greencastle closed the meet in a big way, with the 400 freestyle relay team of Jesse Elkins, Mitchell Ball, Walter Chiarella and Guffey coming from the third seed to win in a time of 3:19.86.

In diving competition, Sam Gould and Matthew Sims made a big impact. The Eagles' Gould finished second with a score of 304.75. Sims, a GHS sophomore, was third with 280.65.

The advancing divers move on to Tuesday's Zionsville Diving Regional at 6 p.m. at Zionsville High School.

The champion swimmers advance to the IHSAA State Finals preliminaries, slated for 6 p.m. Friday at the IUPUI Natatorium.

Complete results will be available in Tuesday's Banner Graphic.