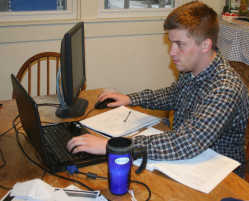 Foster Tidwell is looking up his Relay for Life statistics at his home near the DePauw University campus. Tidwell participated in Relay for Life last year as part of his fraternity, Beta Theta Pi, but his involvement this year has new meaning because of his father, Brant, and his discovery of a brain tumor last year.

GREENCASTLE -- Foster Tidwell is a senior at DePauw University earning his economics major. Originally from Kansas City, Mo., his family still lives there, and his father, Brant Tidwell, is the reason Foster is trying to raise $3,000 for the Beta Theta Pi fraternity.

About two weeks into the official Relay season, and he's almost there.

As of Feb. 22, Tidwell has raised $2,795 alone, and his contribution has brought the team to a total of $4,165. Tidwell's fundraising success has put him and the Betas at the top of the fundraising rankings. But what really matters to Foster is that his father's condition continues to improve.

"It's been an interesting experience," Foster said as he talked about helping his father get past his medical condition.

Brant Tidwell had a seizure the morning after Easter in 2010. Foster was in New York for an internship at the time, but he quickly came home after finding out about the incident. After doctors did a pathology test, Brant Tidwell was diagnosed with glioblastoma multiforme, also known as GBM, a very aggressive primary brain tumor.

According to the American Brain Tumor Association, GBM tumors are a very common but very dangerous type of brain tumor. It grows quickly and is difficult to treat, and as a result, the average life span of someone diagnosed with this type of tumor is about 17 months.

Foster's father, however, is fighting those odds. Brant Tidwell ended up traveling to San Francisco to receive surgery from a highly recommended doctor. They also took the time before the surgery to band together for a family vacation, which helped take their minds off the surgery and eventual recovery ahead.

Brant underwent three months of radiation and is required to undergo an MRI every two months to check the tumor growth, which is currently decreasing. His tumor has receded to the point where he can take a chemotherapy drug as opposed to actual radiation. Brant takes Temodar, a cytotoxic drug designed to destroy tumor cells, about four to five times a month. He's also switched to a low-glycemic diet, eliminating "white" foods and sugars. He's lost 22 lbs. since then.

"I'm not there yet but I'm on the right road," Brant Tidwell said. "You know where you want to be."

The experience tends to drain him though, Foster Tidwell said. And though Brant's recovery has been excellent so far, he has not regained a lot of the critical thinking skills that are vital to his job as a small commercial real estate realtor.

"You'd talk to him and would think he's no different, but he doesn't have the critical thinking skills anymore," Foster Tidwell said.

As a result, Foster said his mother has had a rough time trying to take care of everything. She had helped Brant with his business for the past five years, and now she has taken over the licensing part of the business and begun managing most of the affairs.

"It was really stressful for my mom. She was kind of dealing with it on her own," Foster Tidwell said.

The recovery has also been rough for Brant. Brant recalled first losing his hair during the beginning of the radiation treatments. He had sat in the shower for over an hour washing his hair until no more fell out -- Brant said it was a moment he will never forget.

Brant's progress continues, though he has trouble doing other activities both related to his business and recreationally. Foster said his father misses the heavy involvement he once had in the Boy Scouts of America -- he hasn't been able to go on many camping trips with the scouts since the seizure. But the family has made several new friends as a result.

"We've been blessed with friends helping out," Brant Tidwell said. "It's been an incredible show of support."

During the recovery process, the Tidwells created an account on the site Carepages.com, a website for other patients that are coping with various illnesses and medical conditions. Using the account, the family posted pictures and information about Brant's progress and got to know several other people with similar stories and experiences.

When Beta Theta Pi began to organize for Relay for Life, Foster decided to appeal to people he had met through Caregivers.com for fundraising. The response was sudden and surprising.

From Feb. 3-10, Foster quickly raised $2,000 for his team. Foster said he has never raised anywhere close to this amount of money for Relay for Life before.

The fraternity was just as shocked about the sudden explosion as Foster was. Beta Theta Pi has two Relay teams, one for members and one for pledges, each with its own fundraising goals. Foster's team, the main fraternity team, has decided on a goal of $12,000. Dave Tykvart, philanthropy char for Beta Theta Pi, said he wanted to really push the relay goal and amounts this year.

Foster's total is more than half of the fraternity's total so far, which has inspired them to increase their goal this year.

"We can do better than that," Tykvart said.

This is obviously a great achievement in philanthropy. But what matters most to Foster is that his father gets better. Because of his father's condition, Foster has made several more attempts to go home and visit, and this year, he will definitely be home for Easter.

"Honestly the way to deal with it is sometimes to just forget about it," Foster said. "But it's brought me much closer to the family."