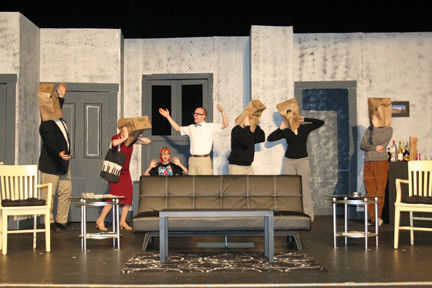 Set in Terre Haute in the mid-1980s, "The Nerd" tells the story of aspiring young architect Willum Cubbert (Aaron Hunter), who has reached a crossroad in his life: Should he continue life as he knows it in "good old Terre Haute," or should he follow the woman he loves, Tansy McGinnis (Kaeli Gray), as she leaves town to work as a weather girl in Washington, D.C.?

Then along comes Rick Steadman (Alex Asbell), a fellow ex-GI who Willum has never met but who has saved his life in Vietnam. Willum wrote to Rick after the war telling him that if he was ever near Terre Haute, he should stop by for a visit.

So imagine Willum's delight when Rick shows up the night of his 34th birthday party. Unfortunately, Rick turns out to be a hopeless nerd.

The play is being directed by GHS theater teacher Bethany Bax. Sophomore Reba Chapple is the assistant director. Tickets are $3 for students and $5 for adults and may be purchased at the door.