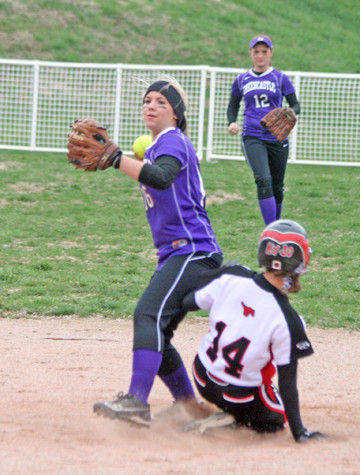 Greencastle freshman Danielle Thomas looks to first after tagging second for an out during Thursday's game against Edgewood.

The signs of improvement were apparent Thursday as Greencastle battled Edgewood on the softball diamond, but the Mustangs were strong enough to walk away with a 4-0 win and leave GHS looking for its first win of the season.

Despite suffering their fourth loss of the season, GHS head coach Chasity Wood likes what she's seeing and believes her team is headed in the right direction.

"We started out with Sullivan on Saturday and we played North Put Tuesday for a double-header and even the difference between the first game and second game with North Put, it's been amazing," Wood said. "The girls are doing great, they're working hard, they're listening, they're doing all the fundamental things right, they're getting all their signs -- everything is just a positive.

"I know the win/loss record isn't where we want it to be, but it's not always about the wins and losses. We're working hard and improving. I really couldn't ask for anything more," she added.

Greencastle began the game strong with shortstop Taylor Pruitt hitting a single to centerfield. But the bats fell silent and the Tiger Cubs left the inning with no runs. That would be a trend that would follow GHS the entire game.

Edgewood was able to open up the game by scoring three runs in the top of the third when Kristin Headdy hit a single to get things going. But when the sophomore made break for second, Skyanna White gunned her down to record the first out. However, the Mustangs' Laura Luther laced a double to left field and was joined on base by Rachel Delay. The duo scored along with Amanda Gilliland to put the Mustangs up 4-0 in the contest.

Greencastle showed it has some big bats, but most hits went to Edgewood fielders, which resulted in the Tiger Cubs never putting a run on the board, but feeling optimistic that in time things will turn their way, quickly found their hard hits.

"You're supposed to peak at the end of the season, so that's what our goal is," Wood said with a laugh.

Pruitt led the Tiger Cubs by going 3-for-3 with a double, while Seahorn was 2-for-3.

Looking forward from Thursday, Wood said for the Tiger Cubs to turn the corner it's just going to take time and game situations to get them there.

"A lot of it is just hitting off of live pitching and being out here during a game situation," she said. "I mean, we didn't have a lot in during the preseason to really get on the field and hit off live pitching. It happens to us last year. We got midway through the season and we starting really hitting the ball hard. We're actually a lot better off this year than we were last year, so I think we'll be fine.

"I really, truly believe every game is just going to be progress," she added.