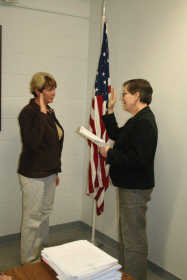 FILLMORE -- When it came time for the Fillmore Town Council to choose a new member, the two remaining members went with experience.

Terhune announced two people had stepped forward to fill the position. He and Jones chose Parker for her background both with Dixie Chopper and in economic development activities, Main Street Greencastle and the county zoning board.

"I had a lot of people approach me (about applying) because I worked at Dixie Chopper a long time," Parker said. "Community service has been something near and dear to me."

Parker has lived in Fillmore for three years, but lived just outside the town before that. She has five children, Jonathan, Benjamin, Malachi, Brett and Jenna.

Terhune read a letter from Jeff Osborn's wife Joan, thanking the town's other officers and workers for their work with her husband.

"I know Jeff was proud to serve with you," Joan Osborn wrote. "He was proud of what Fillmore is becoming."

After Parker was sworn in by Town Attorney Mary Russell, the board voted for Terhune as the new president.

Curt Clearwaters of Liberty Trailers and Putnam County Economic Development Director Bill Dory were in attendance to request a tax abatement on new investment at the local plant.

After an explanation of the process from Dory, the board approved the seven-year abatement.

Parker said this sort of investment in the town is what she wants to see more of as a council member.

"I would just like to help Fillmore move up to the next level -- doing things like Bill and Curt did tonight with the tax abatement," Parker said following the meeting.

Russell presented a pair of ordinances for the council members to review before the next meeting, one on utility collections and a new, more specific, nuisance ordinance.

This should make for a full plate for council members in coming months, as they again tabled reviewing budget cuts for 2011 and a contract with the Humane Society of Putnam County. Terhune and Jones said they would like to get Parker up to speed on the issues so the entire board can make an informed decision.

The subject of the nuisance ordinance made for some heated moments during public comments, as residents Curt Leonard and Cindy Ellis voiced their concerns over the motocross track north of Hendricks Street.

Previous complaints over noise and dust from the track owned by George Terry led to a lawsuit late last year. The outcome of the trial led Russell to rewrite the ordinance.

"If we don't curb something like this right now -- we don't have an ordinance, we don't have zoning -- God knows what's going to happen in this town," Leonard said.

Terhune had to call the meeting to order more than once as Leonard and Terry exchanged words. The council president also added some concerns he had about the track.

Terry advised he and his family are attempting to address the concerns and invited Terhune to come to the property and see the changes.