Hutcheson named Player of the Year 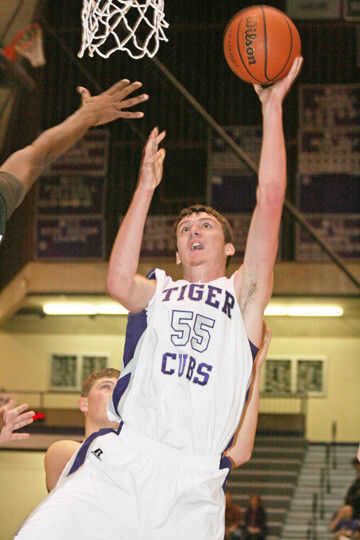 Greencastle junior Nick Hutcheson led the county in scoring (21.7) and rebounds (14.7) and was named the Banner Graphic Player of the Year for the second consecutive year.
Order this photo

Sometimes repeating is harder than getting there, whether it be championships or personal honors. But for GHS junior Nick Hutcheson, he not only maintained his hold on the title of most productive player in the county, but expanded on it and has been named the Banner Graphic Player of the Year for the second consecutive year.

He also had 29 blocks, nine steals and another stat stood out. The junior averaged 62 percent from the field, including 53 percent from behind the arc. He also led the county in rebounds by hauling in a total of 308, with an impressive 127 offensive boards.

Lewis averaged a nice 12 points and 5.5 rebounds per game for GHS this season, while adding 58 assists, 14 steals and 13 blocks. Lewis' ability to drive and create shots not only helped himself, but helped Stuckwish who was waiting behind the arc to knock down some big shots.

Stuckwisch, a GHS sophomore, averaged 10 points per contest and was a major outside shooting threat for the Tiger Cubs. He knocked down 45 three-pointers during the season and had 39 rebounds and 20 steals for Greencastle

Moore was the primary point guard for Greencastle and from his position dished out a team-high 77 assists for an average of 3.7 per game. He also had 61 rebounds and 25 steals, while averaging three points a contest.

While Cloverdale didn't have one player average more than 10 points per contest, it was head coach Pat Rady's mentality of a total team effort that served them well. The Clovers had a record of 11-11 on the season.

Hayden led the Clovers with a 10-point average, with 43 rebounds, 33 steals and two blocks. He was always lurking at the three-point line to make teams pay and averaged 41 percent from behind the arc.

Williams was the Clovers' inside presence and did most of his damage in the paint. The CHS big man contributed nine points per game and had a team-high 144 rebounds, including 49 offensive rebounds. He also had 18 blocks and 12 steals for Cloverdale.

Point guard Donavan Scisney slid into the starting point guard role for the Clovers and the offense didn't skip a beat. The junior averaged five points per game and two assists. He led the team with 29 blocked shots and had 34 steals, while hauling in 55 rebounds for Cloverdale.

North Putnam senior James Hedrick provided many thrilling moments for Cougar fans this season and led his team with 14.6 points per game and was second on the team with 76 rebounds. Hedrick also had eight blocked shots, 25 steals and led the team by shooting 74 percent from the free throw line.

Teammate Jacob Lucas was the Cougars' leading board cleaner, snatching 101 rebounds, including 31 offensive boards. He was second on the team with an average of seven points per game and added four blocks.

South Putnam's Justin Bumgardner had a nose for the ball and was second on the team with 92 rebounds, but tied for first with 45 offensive boards. He also averaged five points and four rebounds per game for South Putnam. Bumgardner led the team in steals with 26.

Greencastle captured the Putnam County title and was perfect during the season against county foes. They, along with Cloverdale, enjoyed big wins during sectional play against Edgewood and North Putnam, respectively.