BY MICHAEL HADLEY, For the Banner Graphic 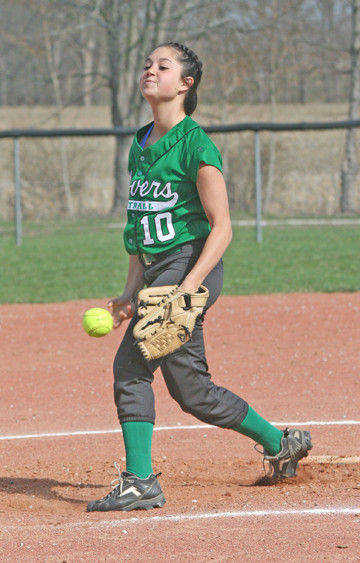 The game began fairly slowly, and appeared to be headed towards a classic pitcher's duel.

For Cloverdale, Paige Gutierrez began the top of the first allowing just one base runner on a walk, and completed a perfect second inning with three straight strikeouts after pushing each new hitter to a full count.

Colleen Hadley walked two in her first inning as the Monrovia pitcher, but effectively mirrored Gutierrez's efforts with an odd 1-2-3 inning of her own. Bradanne Toney hit a double to left center field to lead off the inning, though she rounded second base too far and was caught in a rundown for the first out.

Monrovia finally broke the stalemate in the top of the third, pushing three runs across on three hits.

"(Gutierrez) was doing well the whole time," Clover's coach Kim Bailey said of her pitcher. "After the first two innings our girls just wanted Paige to just strike everyone out."

Cloverdale's offense finally got going in the bottom of the fourth inning. Gutierrez started things off with a single, followed by a Kara Knapp double. Heather Goss helped plate the Clover's first two runs with a single on a 2-2 pitch from Hadley. The Monrovia hurler was able to halt the CHS rally, but the scoring wasn't finished.

While each pitcher was able to go the distance, their middle-inning grooves were eventually tested in the seventh inning. In the top half things looked rocky for the eventual winner, but she dug deep and righted the ship. Coach Bailey knew exactly what happened.

"It looked like she just got mad up there. She said, 'I'm just gonna pitch my game,' and she pitched her game and did one heck of a job."

Gutierrez allowed a double to Hadley to lead off the top half of the final frame. She was eventually plated by Blake Whitaker's single, becoming the shortstop's third run batted in for the game. Cloverdale got out of the inning giving up just the one run, stranding Whitaker on third.

The Clovers entered the bottom half of the seventh now needing three runs to take the lead, and they wasted no time starting their rally. Freshman Adrianna Patterson lead off with a 1-0 double to right field, quickly advancing to third on a passed ball.

After a Shanna Schmutte strikeout, Sam Smith smacked a single, drawing the deficit to one. Brianna Hoff singled to put the game-winning run on first base, bringing the Paige Gutierrez to the plate. The junior rocked a double deep to the outfield, scoring the game tying and winning runs.

Cloverdale's win avenged a 7-1 loss suffered to the same Monrovia team -- and ironically the same pitcher -- one night before. The Clovers move to 3-6, while the Bulldogs slide to 4-2. CHS is in action next on April 18 at home against North Putnam.