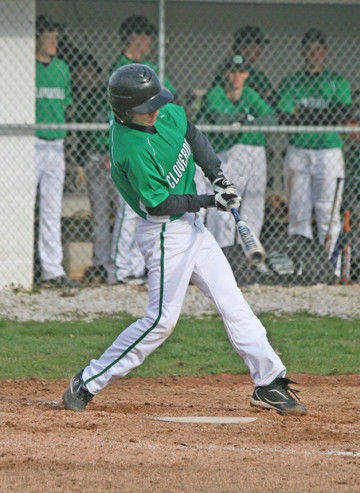 CLOVERDALE -- Wherever there is a baseball field and the Cloverdale Clovers are on it, the faint of heart might want to stay away.

High scoring games have been found in abundance, despite that, the Clovers were on the wrong side of a 9-6 loss to Monrovia Wednesday night.

The Bulldogs opened the scoring with two runs in the top of the first, only for the Clovers to answer with three in the bottom of the inning.

Consecutive singles from Jordan Hayden, Jordan Brinkman and Brian Dale garnered two runs before Monrovia looked to end the threat by getting the next two batters out. Frankie Skiles notched the fourth hit of the inning to drive in Dale and give the Clovers the lead.

Monrovia retook the lead in the top of the second with two more runs, only to watch Cloverdale take it right back. Another three single start produced a run before William Whitinger was nailed while trying to take third base.

Dale was intentionally walked with two outs before Austin Mannan hit the inning's fourth single to give the Clovers the lead back at 5-4.

Cloverdale added to the lead in the third with another single hitting spree. Skiles and Shawn Shipp lead off with singles before Skiles was gunned down at third base. A single by Hayden drove in Shipp. Hayden too was out at third after Brinkman hit the 12th Clover single of the game.

The lead was lost in the fifth inning. Two walks and a single loaded the bases for the Bulldogs before a run was walked in. A ground out tied the game and the single that followed allowed Monrovia to take a 7-6 lead.

They would extend the lead in the sixth. Monrovia opened with two singles and a fielder's choice that knocked off the lead runner at third. A triple by Bulldog third baseman Luke Judson brought in two runs and gave the Bulldogs a 9-6 lead.

Jeremy Gray, who had pitched well in the Tuesday night game, came in to close the deal as he fanned four of the six batters he faced to get the save.

While not having a bad hitting night, walks ended up be a detriment to the Clovers according to head coach Bryan Archer.

"Jordan (Andersen) threw well tonight. We talked about, as a staff, not giving teams free bases. Tonight, we would walk a few batters and they would get the base hit up the middle that, if you hadn't walked a guy or two, wouldn't mean anything," Archer said.

"We gave them some free base runners and they took advantage of that late in the game," Archer added.

The Clovers amassed thirteen hits on the night, all singles, but only one after the third inning. Archer said plate discipline became an issue.

"We were forgetting our approach, being smart and aggressive at the plate. Some guys were chasing bad pitches and not working the count like we were in the first few innings. We were kind of popping everything up," Archer said.

Archer and his squad has a lengthy conversation after the game concluded, one that outlined what his team needed to do starting Thursday against Turkey Run.

"We talked about being the team that we can actually be. 2-5 is not what this team is made of. We've taken ourselves out of games sometimes defensively and with the bats. We talked about putting complete games together, putting these last few games behind us and coming together as a team," Archer said.

"Turkey Run is going to be a tough opponent. I told the guys that tomorrow we have to come out with a different attitude. I'm not saying they weren't ready tonight, because I believe they were, but we need to come out with more confidence in who we are and what we do."