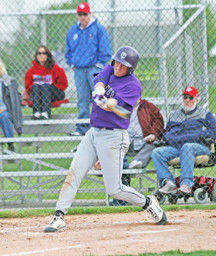 Greencastle senior Tanner Parker was 2-for-4 with a triple for the Tiger Cubs in its 9-0 win over Owen Valley Thursday.
Order this photo

The big bats came out for Greencastle early Thursday and continued to rain down booming shots on the Owen Valley Patriots en route to a 9-0 victory.

"Our bats have been hit and miss all year," GHS head coach Troy Remsburg said. "Yesterday we got shutout one game and then the next game turned around and 10-runned a team. I think it carried over a little bit tonight and I hope it carries out for the rest of the season. We're capable of hitting like that, we just have to do it in the games. It's confidence -- that's all it is right now."

Ryan Battin got things started with a single and was brought home on the next at-bat when Tanner Parker smashed a long triple to the gap in right-center field for a stand-up triple. Parker later scored to make it 2-0 in favor of the hosts after one inning.

Starting pitcher Jesse Vermillion utilized some good command on the mound, which left the Owen Valley batters frustrated. He also benefits from some great field plays by the GHS defense, in particular Nataniel Velasquez at third base in the top of the fourth.

He recorded the innings first out on a nice stop and throw to first baseman Landon Miller, but he later added a highlight reel-worth play to close out the inning. Owen Valley's Logan Terrell ripped a shot down the third base line that Velasquez went to the ground to snag. With Terrell streaked down toward first, Velasquez stayed on his knees and gunned down the runner with ease.

"That was a pretty nice play. Nataniel stuck with it and it kind of shocked me he stayed on his knees and threw it, but he threw a perfect strike to first," Remsburg said smiling.

That momentum carried over to the bottom of the inning where the Tiger Cubs tacked on two more runs. Andy Bell got the offense going with a triple and was joined on base by Keegan Remsburg who earned a walk. Dylan Linton came to the plate and knocked a strong shot to right field to score Bell and Remsburg putting GHS up 4-0 after four innings.

Clearly in the driver's seat, Greencastle went to work yet again in the sixth inning, which proved to be its more fruitful at-bat.

Joe Lenihan reached after being hit by a pitch and Velasquez reached on an error to put two on for GHS. Linton drove a long shot to center to score Lenihan to being a five-run inning for the Tiger Cubs. Also scoring in the inning for Greencastle was Velasquez, Battin, Vermillion and Miller.

With a half-inning standing between him and a shutout, Vermillion took to the mound and struck out the final three batters of the night. Vermillion pitched a complete game shutout with nine strikeouts, one walk and one hit batter.

"He's pitched good, but I'd say that was his best performance in a complete game," Remsburg said. "He's had some good performances and good innings and stuff, but complete game -- that's definitely the best. He pitched very well tonight."

On the night, Greencastle had seven hits, four of them were for extra bases. Remsburg said the defense is a constant for his team, but timely hits have been elusive. But as the GHS skipper pointed out, when they do find their groove, opposing teams better watch out.

"I don't know what flips their switch, but once it's flipped look out they're going to hit the ball," he commented. "Defensive wise, we're great. I can't complain about our defense. We make plays -- tough plays, easy plays -- we're we need to be on the defense. The bats are just now starting to get there."