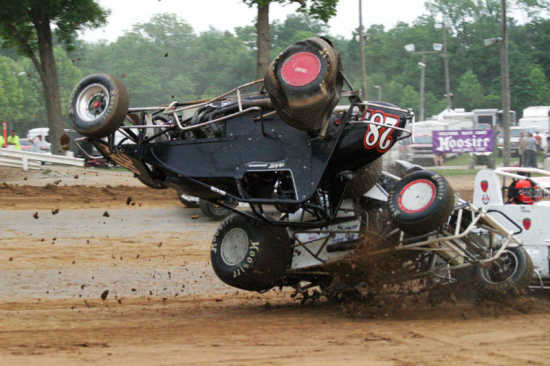 Will Nedderman (No. 28n) gets airborne over the top of Joe Whisler (No. 21) during their sprint car heat race. Both drivers were uninjured. (Photo by CAREY FOX)

PUTNAMVILLE -- Barely 48 hours had passed since fans had witnessed a barn burner of a show at "Indiana Midget Week" at Lincoln Park Speedway featuring the USAC Mopar Midgets, but on Saturday, the show was second-to-none as seven features, three of the make-up variety due to weather on June 4, left the crowd on the edge of its seats.

The regular weekly show saw a stout field of 28 sprint cars on hand as Casey Shuman held off a starving wolf pack of hot shoes to claim the A-main win that saw four drivers in the mix for the checkers off the final two corners. Shuman held off repeated challenges from multiple track championship winner Billy Puterbaugh, along with Brett Burdett and Jon Stanbrough.

In the UMP Modified feature, Brian Hayden captured his fourth feature of the season, taking advantage of the final lap mechanical woes of Schuyler Nahre to take the victory.

The UMP Super Stock win went to Doug McCullough, who was able to make a masterful pass on the bottom of a quicksilver-fast Kenny Carmichael Sr. to score his first LPS victory of the season.

Three rained out make-up features started the night off as the UMP Modifieds took the green flag with Brad Barrow pulling away to claim the feature win in his Diamond Race Car No. 9H. His A-Main win came in the Robertson Lawn Care, Lucas Oil, Finish Line Raceway, DK Designs, AmVet-sponsored machine powered by a Travis Kern Racing Engine.

Josh Burton is no stranger to victory lane at LPS and he found it once more as he battled with Kenny Carmichael Sr. to the checkers for the UMP Super Stock feature victory in the Jerry Burton Masonry-sponsored ride.

The final make-up feature was scored by Ben Williams in the bomber class, as he powered to the finish line in his Steinway-built race care sponsored by Specialty Grafix, Creative Sources and Durabuilt Racing.

The sprint cars opened the regular card of racing as Shuman started on the pole ahead of Burdette, Puterbaugh and Ethan Barrow. However, Stanbrough, who started 14th in the main event, couldn't be discounted from the opening wave of the flag.

Shuman held the point from the beginning, but was firmly in the cross hairs of deadeye sprint pilots behind him. Puterbaugh was locked in and looking for an opening as the laps clicked off, but Burdette was several car lengths behind as Matt Goodnight gave chase ahead of Max McGhee, Stanbrough and Rick Vaughn.

Lap-after-lap, Puterbaugh looked to add his second feature win of the week following Wednesday's score at Gas City. However, Shuman held tight to the lead, working the top of turns one and two and the bottom of the final two corners.

The Arizona-native was zeroed in on Saturday night, working a perfect line and never opening up a gap for Puterbaugh to make a move. However, Stanbrough was creeping steadily through the field to challenge Burdette for the third spot with McGhee in tow. Seth Parker and Ethan Barrow were battling behind them before Jonathan Vennard was collected in turn four and got upside down to halt the field late.

With two laps left, Shuman was perfect on the re-start, opening a small gap as Puterbaugh went to the top in search of the victory. However, his last shot went for naught, as he got loose off turn four, which opened a spot for Burdette.

Burdette rocketed to the checkers in second ahead of Stanbrough and Puterbaugh.

In the UMP Modified feature, Chad Combs locked hold of the lead as front row starter Ryan Cary jumped the cushion and slipped back into the mix. Combs held tight to that lead as Nahre and Kenny Carmichael Sr. locked horns side-by-side ahead of Barrow and Hayden.

Combs briefly held a several car length lead before Nahre gathered him in and attempted to find space underneath for a pass in turns three and four. Nahre made contact with Combs coming out of turn four and spun the leader to bring out the caution flag.

The re-start saw Combs on the tail and Nahre holding the late lead as Hayden and Carmichael went door-to-door for second with Barrow firmly challenging for the position.

With one lap remaining it looked as if Nahre would pick up his first win at LPS this season, but he would pull off the track after taking the white flag as Hayden overtook him and scored the feature victory in the Indiana Openwheel.com, Cyclone Custom Products, Ottawa Homes No. 2H.

Once he grabbed the lead, McCullough made it count in the Shafer's Collision, Patterson Driveline, Durabuilt Racing, Finer Detailing, Freeman Signs, Hobbs Chassis, No. 19m.

McCullough built upon his lead over the final few laps to score the victory.

The final feature of the night saw Tidwell battle past Shepherd over the first half of the race and then held Jordan Almanza over the final lap as Shepherd placed third ahead of Tony Tidwell and Bob Farris. Tidwell's win complemented his second-place finish in the evening's make-up feature.

Next week will include the Super Stock Summer 30 with $500-to-win along with sprints, modifieds and bombers.