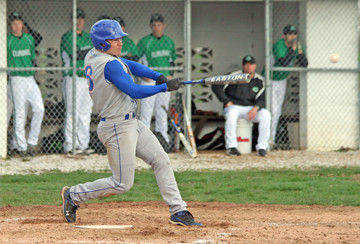 South Putnam junior Rob Gibson was named the 2011 Banner Graphic Player of the Year. He was one of five juniors to make the squad this season in addition to four seniors and three sophomores.

It's always nice when your leadoff hitter has a nice blend of speed and power.

Following in the steps of his teammate Cameron Chestnut last season, South Putnam's Rob Gibson personified those attributes and has been named the 2011 Banner Graphic Player of the Year.

This marks the third straight year the Eagles have had the Putnam County Player of the Year named from their squad. Gibson was close to top in almost all categories for his team and the county this season.

This season Gibson, a junior, batted .461 from the leadoff spot and collected 35 hits, including six home runs and four doubles. His six homers were second best in the county in 2011. He had 14 RBIs, 31 runs scored and led the county with 25 stolen bases for the Eagles.

Zimmerman led the team in batting his senior season with a .467 average and 13 RBIs. He also had 28 hits, including four doubles and one triple and 11 runs scored. He second on his team with six stolen bases. On the mound he had a record of 1-6 with an ERA of 3.02 with 37 strikeouts.

Atwood, a junior at CHS, led the Clovers with a batting average of .424 and had 36 hits and 16 RBIs. He had four doubles and seven strikeouts. Junior teammate Brinkman was second on the team with a .407 batting average and was first on the team in hits with 35. He also led the team with six home runs and was second on the Clovers with nine doubles and 16 RBIs.

Rounding out the trio of juniors from Cloverdale, Dale led the county with 33 RBIs and batted .370. He also had 30 hits, including five home runs, one triple and 10 doubles. On the mound he was a perfect 3-0 with an ERA of 2.72 and 36 strikeouts.

North Putnam's Watson, a senior, led the county in home runs with 11 bombs on the season. He was third on his team in batting average with .333 with 25 hits and three triples. He was second in stolen bases for the Cougars and in runs scored with 25. He had a record of 4-3 pitching with an ERA of 2.18 and 51 strikeouts.

Badten, a North Putnam sophomore, led the team in doubles with seven as well as seven stolen bases and was second in batting average with .364. He also had 36 hits, one home run, one triple and 17 RBIs. He was 2-3 for the Cougars with an ERA of 2.39 and 53 strikeouts.

Fellow sophomore Day led the team in batting average with .394 and was second in doubles with five. Day had 28 hits, with 20 runs scored and 17 RBIs.

Battin, a GHS junior, led his team in most offensive categories. Battin led the team in batting average with an average .430, in hits with 37, in RBIs with 24 and in steals with six. He also had 19 runs scored, two home runs, one triple and six doubles. He was 3-1 on the mound with an ERA of 5.40 and 20 strikeouts.

Sophomore clean-up hitter Miller batted .400 with two home runs, one triple and six doubles. He had 32 hits, 19 runs scored and 15 RBIs. Remsburg, a senior, batted .342 this season with 25 hits, including two home runs, three triples and five doubles. He had 19 runs scored and 23 RBIs, second best on the team. Remsburg also had a record of 2-4 on the mound with an ERA of 3.05 with 51 strikeouts.

Fellow senior Parker was third on the team in batting average with .395 and was second on the team in hits with 34. He recorded two home runs, two triples, four doubles and had 20 runs scored. He also stole five bases on the season.

The class breakdown for this year's team is four seniors, five juniors and three sophomores.