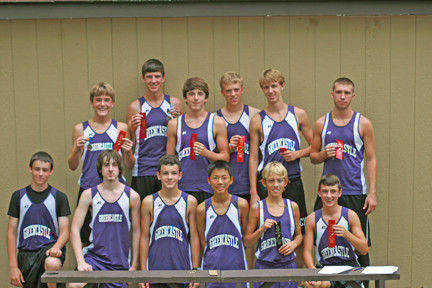 VEEDERSBURG -- This past Saturday, the Greencastle boys cross country team opened up its season by placing second at the Fountain Central Grand Prix. The Tiger Cubs looked strong throughout the 5k race giving the favored McCutcheon a scare.

Saturday's result was a major step in the right direction according to Greencastle's head coach Craig Callahan.

"We came here last year and finished sixth and felt really good about it," he said. "This year, with this team, sixth isn't good enough. We wanted to place higher and knock off a few of the bigger schools. That's going to be our focus all season. We ran strong and accomplished that today."

Running up front for the Tiger Cubs was junior Tyler Hudson. Hudson placed third overall with a time of 17:38, knocking off roughly 30 seconds from last year's time at the Twin Lake's course.

"My top runners weren't far off their personal records today, which is great considering we didn't even come here expecting to P.R.," Callahan said. "We had a very difficult week of practice, so for the guys to come out today and shave time on a difficult course was great."

The highlight of the meet came from freshman Elijah Brattain. Brattain's previous P.R. time coming into Saturday's meet was an 18:55 on the Tiger Cubs' home course at the Fairgrounds. On Saturday he soared to the front of the pack finishing 12th overall with a new P.R. of 18:19. Coach Callahan was thrilled with his performance.

"I expect these types of performances from Tyler, Ryan, and Nathan, but not from a freshman. We were thrilled with the time at the Fairgrounds a couple weeks ago, but Brattain continues to impress us. He fought for position today with juniors and seniors and held his own. We're going to have to re-evaluate his individual goal for the season."

Rounding out the rest of the field for Greencastle was junior Paul Bryan, who placed 21st with a time of 18:38, only seconds away from setting a personal record. Freshman Taylor Secrest, who was back from injury, set a P.R. of 19:29 placing 30th.

"Paul has improved so much its unbelievable. He's running with so much confidence," Callahan said. "And how could I not be proud of Taylor? The kid has the heart of a champion. All week he begged me to let him practice with the rest of the guys, even though he was hurting, but we rested him. He turns around and runs a P.R. I love that in a runner."

The Tiger Cubs return to action Saturday at the Danville Hokum Karum at 9 a.m.