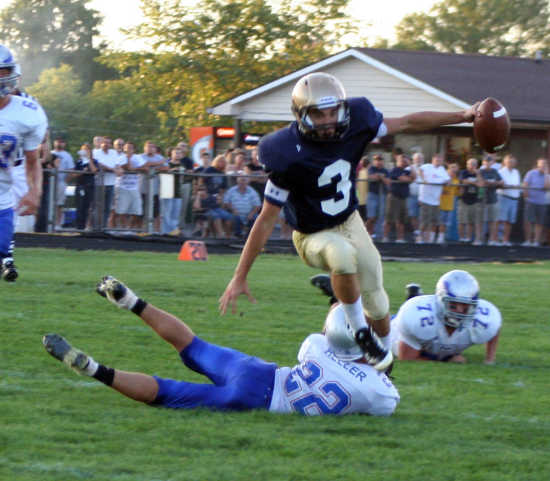 It's a simple request every football coach makes of his team, but sometimes it's tough to accomplish.

On Friday, South Putnam put the ball on the ground six times, with Tri-West recovering three of them. The missed opportunities were too much for the Eagles (1-1) to overcome, as they fell to the Bruins (2-0), 29-13.

"That's a good football team," Burgess said pointing across the field, "and we were good enough to beat them. But we didn't -- we beat ourselves."

Besides the fumbles were a number of costly penalties, missed defensive assignments and general breakdowns that are especially troublesome against a quality team like the Bruins.

Tri-West opened the scoring in the second quarter when Austin Hendershot found Mitch Alexander for a 33-yard touchdown pass with 7:13 to go in the half.

South Putnam answered with its best drive of the game, with a nearly 6-minute drive that covered 76 yards in 14 plays. Rob Gibson capped things off with a 1-yard touchdown run, and the score was tied 7-7 with 1:24 until halftime.

Tri-West wasn't happy with a halftime tie, though, covering 42 yards with a penalty and a pass before Hendershot put together the most exciting play of the game.

With 14 seconds to go, the senior quarterback could find no one open, so he scampered through traffic, up the east sideline for a 35-yard score as time expired.

After a week when running back Cody Coll had nearly 200 yards for the Bruins, Hendershot showed Tri-West has another option out of the backfield, throwing for 168 yards and running for 81 more.

"The Hendershot kid is really good," Burgess said. "He's much, much better than I even thought he was. I knew he was a good player, don't get me wrong. But he made some plays tonight. That's a great one-two punch they have."

The Eagles answered in the third when freshman Lucas Lorian scored from 2 yards out, but missed the extra point to still trail 14-13.

The turnover bug got worse from there, though, and they never seriously threatened again.

Coll added a pair of rushing touchdowns to bring the game to its final score.

On the defensive side, Burgess saw just a few plays that really made the difference.

"Defensively (it was) two or three big plays, and those are blown assignments. Those are things that we did to ourselves," he said. "Hats off to Tri-West. That's a very good team. They're going to win a lot of football games, but we played well enough that we were in this thing."

On the offensive side, Gibson led the Eagles in rushing and receiving, with a total of 140 offensive yards. Quarterback Seth Hammond was 9-for-15 for 79 yards.

Up next for the Eagles is Rockville, along with a celebration of the 25th anniversary of South Putnam's 1986 state champions.

"We've got to take care of ourselves. We've got to clean things up and get back to executing like we did in week one against Owen Valley."