By CHRIS GILBERT, For the Banner Graphic 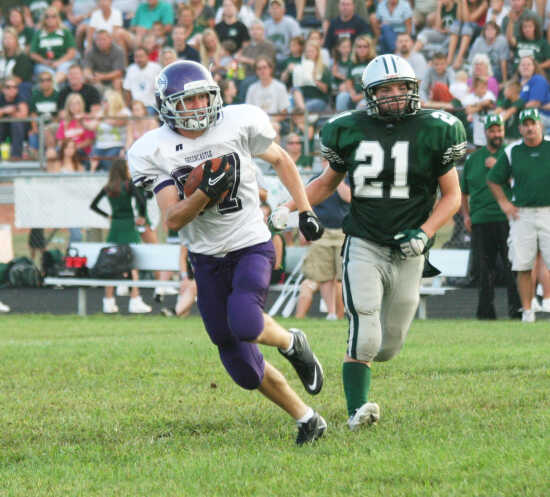 Greencastle's Hayden Stuckwisch, shown here against Monrovia, was a terror for an opposing quarterback once again. Stuckwisch returned a interception for a touchdown Friday to help the Tiger Cubs walk away with a 54-0 victory

On Perhaps the nicest evening of the summer, the Greencastle Tiger Cubs had their home opener with the West Vigo Vikings visiting Harbison Field. With the stands full, the Tiger Cubs gathered under the arch dedicated to Coach John Fallis preparing to do battle with the visitors from Terre Haute. As the entrance theme played the tiger cubs roared onto the field. West Vigo won the coin toss and elected to defer to the second half.

Greencastle took the kickoff, but the offense struggled on the first possession. On second and five a quarterback keep by Nick Gilliam for a 10 yard gain was called back for illegal procedure, an incomplete pass and a nice run by Derrick Lenihan still left the cubs short forcing a punt on fourth down.

West Vigo's first possession of the game would be an indication of things to come as the Tiger Cub defense just picked up where it left off last week against Monrovia as West Vigo could gain nothing against the swarm of purple that came across the line with each snap of the ball ending with a fourth down punt that was blocked by Mac Shuee giving him his first of two punt blocks of the night.

The Tiger Cubs got the ball on the West Vigo eight yard line. With a handoff from Gilliam to Leniham would waltz into the end zone for his first of four touchdowns of the night. The PAT was no good, Greencastle up 6-0 with 7:19 seconds in the first quarter.

The Tiger cubs kicked off to West Vigo and the next possession was much like the first with only a total of two yards gained and forced to punt the ball. This time they got the punt off but it was very close to being blocked by Shuee again. Greencastle would take possession on their own eight yard line.

Greencastle managed to get the ball out to the 20 yard line before West Vigo forced a fumble and recovered the ball, but the Tiger Cubs shut them down forcing a fumble and getting the ball back. On third and 12 Gilliam dropped back to pass and hit a streaking Shuee for a 22 yard gain. Another quick pass to Shuee picks up another 16 yards giving them a first down and into West Vigo territory.

Then a handoff to Lenihan, who broke it up the middle for a run to the West Vigo four yard line, two plays later and Lenihan goes untouched into the end zone for a Tiger Cub touchdown. Greencastle went for two but came up short at 10:46 in the second quarter the Tiger Cubs were up 12-0.

The ensuing kickoff gave West Vigo the ball on their own 28 yard line where they would be forced to punt again, and once more Shuee goes un touched to block his second punt of the night, Kellan Alspaugh recovered the block punt Tiger Cub football deep in Viking territory. On third down Gilliam found Shuee again to put the Tiger cubs on the 4 yard line for a 1st and goal. Lenihan would do the honors of going untouched into the end zone for the touchdown. The Tiger Cubs would go for two again this time Gilliam would keep the ball around the right side in for the extra points.

With 6:27 to go in second quarter Greencastle up 20-0. The Vikings would get the kickoff at their own 33 yard line. They would get there first first down of the game in this series as quarterback Jacob Soliday hit Cody Thornton at the Greencastle 32 yard line but that would be it as the Greencastle defense would take the drive out of them with a interception by Caleb Robinson.

On second and 10 Lenihan broke loose for a 48 yard run taking the ball to the West Vigo 23 yard line. The next play was a handoff to Lenihan for another 13 yard gain. On first and goal for the Tiger Cubs, Lenihan took the ball up the middle for a Tiger Cub score. The two point conversion good with a pass from Gilliam to Shuee. The score was 28-0 Greencastle with 1:15 left until the halftime

Greencastle would again kick off to West Vigo but would shut the offense down going into halftime with a 28-0 lead.

The second half would have Greencastle kick off to the visiting Vikings. The Purple defense once again stuff West Vigo forcing a punt. Chad Keyt would took a good punt from West Vigo and took the ball out to the 27 yard line where the offense would find its rhythm and Greencastle would give West Vigo a healthy dose of Lenihan as he pounded the ball up the middle breaking it to the West Vigo 48 yard line. Then Gilliam saw drop back and hit Ryan Battin for a 26 yard gain to the 12 yard line. The next play Gilliam rolled out and hit Nick Hutcheson down the sideline for a touchdown. Hayden Stuckwisch would kick the point after, at the six-minute mark in the third Greencastle stretched the lead to 35-0

The troubles would continue for West Vigo on the next possession as a third and eight pass would be picked off by Battin at the Tiger Cub 35 yard line. Pointing to his blockers, Battin would break it down the sideline for a 65 yard touchdown. Point after would be good by Stuckwisch and the Tiger Cubs go out to a 42-0 lead.

The kickoff was blasted by Stuckwisch and taken by Cody Thornton at the five yard line where he got the ball out to the 12 yard line before he was drilled by a pack of Tiger Cubs. Another shut down by the defense and a long third and 12 forced the Vikings to try to pass again, and again the receiver was a player wearing purple. Stuckwisch picked off Soliday and run it in for another Tiger Cub touchdown.

The Vikings struggled to gain yards but on fourth and one they would go for it and pick up the first down. That would be the last first down in the series as the swarming storm of purple drove them back forcing a punt on fourth down. Greencastle would get the ball on their 47 yard line.

Nate Christy entered the game at running back in this series and on third and seven he would take a handoff around the right side and blow past the defenders taking the ball into the end zone for another Greencastle score.

"The offense struggled a little early in the game but our defense kept us in the game. I think our special teams did a great job, Mac has blocked three punts in the first two games," Buis said.