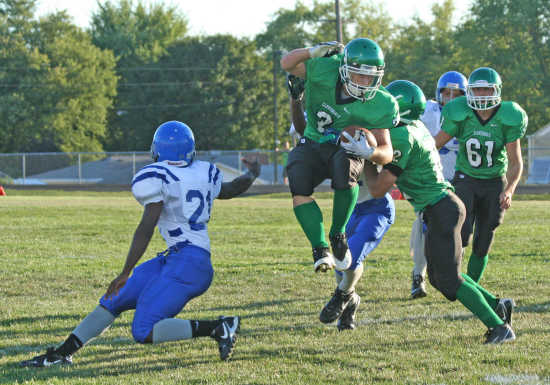 CLOVERDALE -- The Cloverdale football team welcomed Anderson Prep Academy to town Friday and flexed some offensive muscle in the process. The Clovers tossed up 53 points on the Jets to earn their first victory of the season.

The Clovers exploded on the Jets, gaining a whopping 260 yards on the ground and an equally impressive performance through the air. Junior quarterback Justin Wilson completed six passes on the evening, five of which went for touchdowns en route to a 6-for-15 performance for 138 yards and five touchdowns.

"Justin just continues to get better every day. You hear coaches say that all the time about kids and you don't know how accurate it is, but I can tell you that kid's football lQ is growing on a daily basis," coach John Butler said.

For Butler, the win was even sweeter. It was his first as the head coach of the Cloverdale program and he said it felt good.

"It's pretty cool," Butler said smiling. "Last week was a learning experience in terms of finding out what the staff and kids need to get better at. We were better at things and not as good as we were at other things, but really worked hard this week and we had the chance to come out and stick to our game and practice our stuff.

"We were able to put some points up early on a young team that's starting out. Our kids played pretty well I thought. From a personal standpoint, it feels good to get that first one. I got it and now we can move on," he added.

Cloverdale got its scoring going when Wilson hooked up with Chuck Strunk for a 10-yard touchdown at the 8:47 mark in the first quarter and there was not looking back for the Clovers.

Senior running back Jordan Brinkman scored later in the quarter to put the Clovers up 14-0. Wilson and Trevor Lockwood teamed up for a score before the quarter expired to have the Clovers in clear control, leading 20-0 after one quarter of play.

Wilson tossed two more touchdowns in the second quarter to have CHS up big at the half. First he hit a racing Ethan Atwood for a 45-yard strike and then hit Wade Warren for a 10-yard score before the half.

Leading 34-0 at the half, Cloverdale was able to maintain control in the second half and add to its already sizable lead.

The Clovers only scored once in the third quarter, but it was a big on. Wilson and Atwood teamed up again for a 44-yard touchdown with 6:33 on the clock in the third.

Following a Justin Grever score with 3:26, Cloverdale's defense got into the scoring act. Anderson Prep Academy tried the run the ball up the gut, but Cloverdale's defensive line had other ideas. They met the runner at the line of scrimmage and forced a fumble, which Lockwood happily scooped up.

Lockwood grabbed the ball, took off down the Cloverdale sideline and 70 yards later gave Cloverdale its final score of the night. With the touchdown, Cloverdale handed Anderson Prep Academy a 53-0 loss and gained some confidence heading into its match-up with Monrovia.

Cloverdale will host Monrovia next Friday at 7 p.m. in its first West Central Conference game of the season.