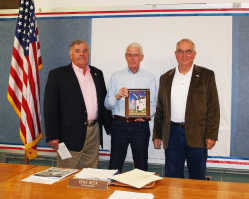 Retired Veterans Service Officer Will Neibold (center) was presented with a plaque commemorating his years of service to the county during an October Putnam County Commissioners meeting. Presenting him the plaque were State Rep. Jim Baird (left) and Commissioner Gene Beck.

Nearly two decades of service is a long time, but when the Putnam County Commissioners recently recognized Will Neibold, it was about a lot more than years of service.

The county's longtime Veterans Service Officer retired from his post on June 30, having been in the position since Jan. 1, 1992.

In honor of his retirement and more than 19 years of service, the Putnam County Commissioners and State Rep. Jim Baird presented Neibold with a personalized plaque on Monday, Oct. 17.

Besides the years, local officials were impressed by the care Neibold gave not only Putnam County veterans, but the veterans of surrounding counties who needed assistance.

Baird, a disabled veteran himself, noted how Neibold was able to balance a caring spirit with a high level of professionalism.

Giving of himself to serve the veterans, Neibold would also take one day a week and dedicate it to taking local veterans to the VA hospital for the care they needed.

Baird also noted the work Neibold did to bring money into the county in support of veterans programs.

"He was recognized on more than one occasion for the service dollars that he brought to this area," Baird said. "I think he ranked in the top 10, and that's going up against areas based on population."

Besides the county recognition, Neibold is also set to receive a Distinguished Hoosier award. With this year's Veterans Day being a special one numerically, Baird thought it would be nice to have Neibold's award bear the date.

"We went ahead and got him a Distinguished Hoosier Award that's presented by Gov. Daniels and the State of Indiana," Baird said. "Since this is a unique date for Veterans Day -- 11/11/11 -- we put that date on it."

Neibold has been replaced as Putnam County Veterans Service Officer by Jerry Williamson.