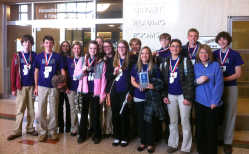 "We placed third with a mostly freshmen team," Kempf told the Banner Graphic. "So I'm looking forward to the future."

That's quite an accomplishment, especially while spelling words the likes of quidnunc, montmorillonite, hematopoiesis and weigela.

Annalysse Mason posted a near-perfect score of eight of nine.

"All of my experienced spellers scored perfect or near-perfects," Kempf said. "Others were prepared but nervous.

"I can't wait to see how this mostly freshmen team does next year," she added.

Moore is the only senior on this year's GHS squad.

"But I hear I have some more great freshmen coming next year," Kempf said of the current eighth-grade crop of spellers.

Greencastle had entered Saturday's state finals with the highest area score in Class 3, having recorded a 68 at Danville on Oct. 17.

That was four points better than Cascade at the area level.