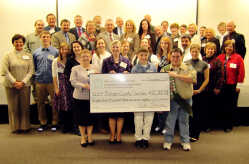 Even in the midst of financial instability of 2011, the Community Foundation was able to award grants totaling $189,901.96 from its unrestricted and field of interest endowments.

Elaine Peck, executive director, recognized individuals and organizations who have given unrestricted gifts to the Community Foundation, making these grants possible.

"Without individuals and organizations that make unrestricted gifts and start unrestricted endowments, the Community Foundation would not be able to have the impact in the community that it does today."

Each year the Community Foundation awards grants in the spring and fall for charitable projects that improve the lives of Putnam County citizens.

Three different types of grants are awarded: Community Grants, Endowment Builder Grants and Youth Philanthropy Grants. Each has its own application and requirements. Attendees had the opportunity to hear about one grant project in each of the three areas.

Steve Setchel presented the work of Putnam RISE to bring energy conservation to the forefront of Putnam County. Robert Steele of the Cloverdale Community Dollars for Scholars told how important the Foundation's support is through the Endowment Builders Program, which matches the funds that an organization raises for its endowment. The Foundation matches one dollar for every two dollars that is raised during an Endowment Builder Project.

Rod Weinschenk, president of the Putnam Friend of Youth Foundation, which runs Camp Friend, told of the plans for re-establishing the camp. The Foundation's Youth Philanthropy Committee has helped fund two Eagle Scout projects, which have benefited Camp Friend.

Evan Scott told of his project to build more than 480 feet of split-rail fencing at the camp. Evan is a member of Greencastle Boy Scout Troop 99. The second project is headed up by Scott Duggan from Boy Scout Troop 93,which replaces the old restroom facilities with environmentally friendly composting toilets.

Youth Philanthropy grants awarded for the fall of 2011 totaled $2,380. The recipients are:

The Endowment Builder Grants approved for the fall are:

All eligible organizations are encouraged to apply for grants from the Community Foundation. For more information, persons contact Dean Gambill, community development director, at 653-4978.

The Putnam County Community Foundation is a nonprofit public charity established in 1985 to administer funds, award grants and provide leadership, enriching the quality of life and strengthening community in Putnam County. The Foundation administers more than 200 funds for donors supporting a variety of charitable causes.

For more information about the Community Foundation, visit www.pcfoundation.org.