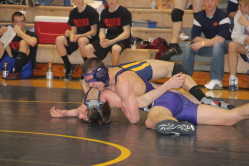 Not needing his eyes to take control of his first-round match, Greencastle's Aaron Langdon puts himself in good position to advance at Saturday's Mooresville wrestling regional. Langdon is among four Greencastle wrestlers and two South Putnam wrestlers advancing to the Evansville Semi-State.
Order this photo

MOORESVILLE -- Six Putnam County wrestlers will continue their seasons next Saturday in the Evansville Semi-State, hosted by Reitz High School.

Cloverdale, Greencastle, North Putnam and South Putnam sent 17 wrestlers to the Mooresville High School regional, but found the competition more difficult than the last round, with the Cougars and Clovers unable to advance anyone on to Evansville.

Greencastle head coach Matt McComish was content with the advancement of half of his regional wrestlers.

"We brought seven guys here today. For a couple of guys, it was their first time at the regional. We got four through and we're happy with that," McComish said. 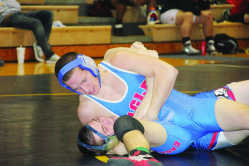 Eagle head coach Josh Hendrickson was also content with the advancement of his two wrestlers.

"We're happy we got two guys out with Jesse and Rudy advancing. It was a hard day for some of the guys but we're happy to be getting two through," Hendrickson said.

Gardner's third place finish came at the expense of Langdon again in a tightly contested 2-0 win for the Eagle senior. Gardner scored on an escape and locked hands called for the narrow victory. 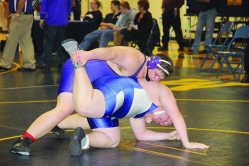 Greencastle senior Will Mobley's fourth-place finish at 285 pounds keeps his senior year going for at least one more week.
Order this photo

Harris claimed a 6-3 win over Brownsburg's Tyler Harlan, whom Harris lost to in the sectionals. Harris was able to score takedowns in the first and second periods and was able to prevent Harlan from doing the same in the closing stages to hold to the win.

The competition only gets better from here, and both coaches will spend the week getting their wrestlers ready for the trip south.

"We've got to check out the draw and see which regional champions we're going to be facing, since they all finished fourth.," McComish said. "We'll wrestle them and go from there. 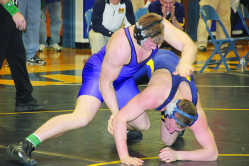 Greencastle senior Ben Hesler attacks his first round opponent on his way to a fourth place finish in the Mooresville regional.
Order this photo

"It all depends on the draw. Sometimes you wrestle well and sometimes you go out there and you have a bad day," McComish added. "Hopefully we're wrestling well that day and we can make it through and win those first two rounds to go to state."

"We'll see what happens at the Semi-State," Hendrickson said. "You never know what's going to happen when the match starts so we'll see how it goes from there." 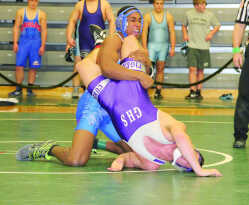 South Putnam's Rudy Harris, shown here in action at the WCC meet, is one of two Eagles marching on to the Evansville Semi-State after placing third at 195 pounds.
Order this photo 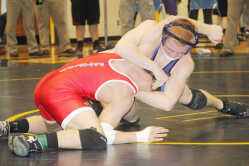 Next Meet: The Rrgional advancers will compete at the Evansville Reitz Semi-State next Saturday.