South Putnam gets first win against Northview in 16 years, 60-54 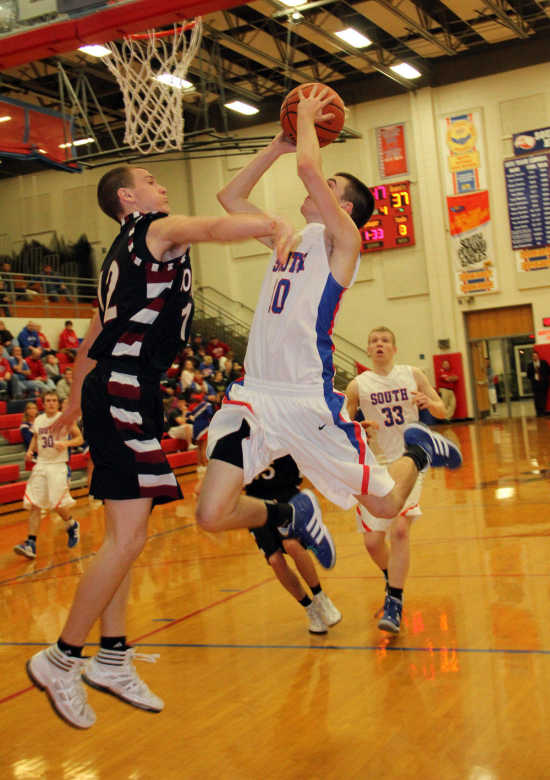 The South Putnam boys' basketball team did something Thursday it hadn't done since the 1995-96 season -- they beat the Northview Knights. In fact was 16 years to the day that South Putnam got its last win against the Knights.

South Putnam defeated Northview 60-54 for its eighth win of the season and third in a row.

As South Putnam head coach Troy Burgess pointed out after the game, it wasn't the prettiest game to watch, but his team was able to get the win nonetheless.

"They played with a lot of heart. They've learned and we win that one. We weren't winning the ugly one early on. This was an ugly ones, but we still got the win. It's always nice to correct mistakes after a win," Burgess said.

South Putnam led the contest from the opening tip and have to fight off a tough Northview squad more than a few times as they continued to slice away at the lead throughout the ball game.

The Eagles jumped out to an 8-2 lead before the Knights rallied back to cut the lead to 8-6. Alex Kelly scored underneath and Sawyer Arnold knocked down a three-pointer at the buzzer to give South Putnam a 13-6 advantage after one quarter of play.

The Eagles and Knight played that same game of back and forth for the entirety of the game, with South Putnam building a lead only to watch as Northview chipped away to get within striking distance.

The teams went to the locker rooms with South Putnam leading 23-20, but the best was yet to come for the Eagles.

After being outscored 14-10 in the second quarter, South Putnam came out in the third and out-performed Northview 14-11 to claim a six-point lead going into the final quarter of play.

The final quarter saw the most action between the two schools, with each squad posting a 23-point quarter. But South Putnam was able to knock down its free throws to seal the win.

South Putnam went 15-of-17 in the final quarter and 24-for-30 for the game. Burgess agreed that proved to be the difference in the ball game.

"That's the difference," Burgess said. "And it wouldn't have been that close if we made free throws early on, but we made them when we needed to. It's a win and I thought we gutted it out and did what we needed to do to get one.

"Two months ago, we don't win that game, so the kids have come a long way," he added.

The Eagles are in the middle of a three-game winning streak and to get a win against a squad that's been a thorn in their side for the past 15 years is big in terms of building confidence.

"It's huge," Burgess said of the win. "It helps get us ready for the tournament because we are gaining some confidence and gaining some momentum. Now, as we talked in there, we play like this in our sectional and it's one and done. We can't play like this and try to be competitive and try to win a sectional. So we know we have to play better come tournament time, but we're playing pretty good.

"With a 20 game season, you're going to have some game when you maybe don't play quite as well. And we've done that a few times and when have, we've lost," he added.

Burgess said it feels nice to know you didn't player your best and still be able to walk away with a victory.