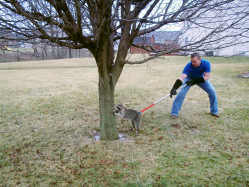 Each year Putnam County and surrounding areas experience problems not only with skunks but other pests. David Brabham has started his own part-time buisness, The Wildlife Wranglers, to help capture pesky critters.

Each year Putnam County has experienced the spring stink of skunks. It has become a nuisance for residents as skunks make their way into the county and risk residents, homes and pets getting sprayed with their pungent defense spray.

Most of the year, skunks are only seen at night or when they are disturbed which leads to spraying their obnoxious odor. However, February through April in Greencastle is a particularly smelly time.

It is in this time period where skunks are looking for a mate in which skunks spray nightly to attract a mate during this season eventually giving birth in May, which leads to more odor.

"Skunks should be removed before they have young," said David Brabham, owner of the Wildlife Wranglers LLC. "Once skunks give birth, the cost of the project increases as well as the smell."

After skunks are removed from the denning site, the entrances should be closed to prevent further inhabitation.

Brabham, a wildlife specialist recommends that although one may smell a skunk near a home this spring, do not panic. Many times skunks will just pass through yards on the search for a mate and do not pose a long-term risk to pets.

However, long-term exposure for multiple days should result in calling wildlife control.

Skunks have taken quite a liking to the Greencastle and surrounding communities because of the perfect habitat, which includes open areas interspersed with woods. Skunks often den beneath buildings, sheds, decks, garages, crawlspaces and log piles, which draw them to towns with plenty of hiding spots. Their preferred food is lawn grubs and insects, so they leave the evidence of their presence with small holes in yards.

Brabham got into wildlife wrangling when he was younger through hunting outdoors as well as trapping.

"I went to college for Wildlife Management," said Brabham. "After I got out of school I decided to do this as a part time job."

Brabham is busy all year round, only slowing for a short period of time between the months of November and December.

"I really enjoy what I do," said Brabham. "Every day is an adventure."

Although, skunks are a major problem, Brabham also traps such creatures as black snakes, raccoons, bats, possums and moles.

Many would be scared of getting sprayed by the foul odor of a skunk, but Brabham has it down to almost a science.

"It's always a concern," explained Brabham. "Basically, I can almost, not 100 percent, almost guarantee I won't get sprayed. The key is keeping the skunks calm."

The Wildlife Wranglers LLC has been a Greencastle business since 2010. It provides Putnam, Hendricks and Morgan county residents with a full line of wildlife removal services including humane trapping and exclusion.