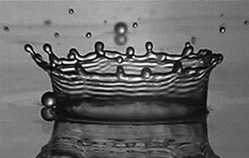 What happens when a water droplet hits a puddle?

A lot more than you might think, a DePauw University professor says. But it happens so quickly -- in just a few tenths of a second -- that the naked eye doesn't see much more than a plop and a ripple.

To see what really happens, you'd have to slow time. If you could do that, you'd see what Assistant Professor of Physics and Astronomy Jacob Hale sees.

At a relatively pedestrian 10,000 pictures per second, the droplet hitting the puddle stretches out over a minute. Take a closer look. Is that water bouncing ... on water?

Captured by Alexander B. Johnson, a student who worked with Hale last fall, the video begins with a small splash. As the water jets upward, a new, smaller droplet is pinched off. Then another. And another. Soon, the new droplets become too small to see.

"It's kind of a fun theoretical problem," Hale says. "Each droplet is exactly half the size of the preceding one."

Surface tension and a thin layer of air make the droplets behave the way they do, preventing them from coalescing immediately, but understanding the science and seeing it unfold in real time are two different things.

"Nature is amazing," Hale says. "I mean, just think about what happens with these water droplets. I didn't create that. Nature did. There are amazing things in terms of beauty and complexity that are out there for us to study."

He isn't alone in that opinion. Despite being a new face at DePauw, his high-speed imaging lab has quickly made him one of the most sought-after people on campus.

Since his arrival in 2011, an art professor has asked to work with him to capture stills for a course on dynamic photography, and a biochemist used his lab to create videos of daily phenomena that show just how quickly biochemical processes occur.

During the recent January Winter Term, Hale is using high-speed imaging to help sophomore Joseph H. Collins study how asteroid impact craters form. Just how do you simulate that?

"Upon impact, an asteroid becomes a bomb," Hale explains. "It's a piece of rock, but the impact creates more thermal energy than if it had been all TNT. It turns out that if you take loose sand and shoot a paintball into it, that's a very good physical model of an asteroid impact."

The beauty of these images is that you don't need to be an expert to appreciate them. They are captivating things, almost worthy of piano accompaniment. That point isn't lost on Hale -- quite the opposite, actually. He hopes they instill others with the same sense of wonder that made him want to learn more.

"It's no fun learning physics unless it inspires you," Hale says. "That's the core thing about doing this. You can just see the image, and it inspires you. Study the physics after that."