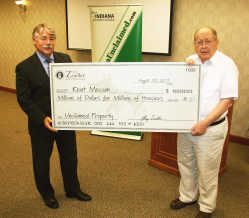 Back in August, "significant" unclaimed money found its way back to Greencastle resident Kent Mecum (right). During a visit to the Inn at DePauw, Indiana Attorney General Greg Zoeller presented Mecum with a ceremonial check commemorating the event.
Order this photo

INDIANAPOLIS -- Attorney General Greg Zoeller has announced that more than $44 million in unclaimed property was returned to residents or former residents of Indiana during 2011.

"While $44 million was returned to its rightful owners, the amount of money turned over to the state by holders more than doubled from the previous year," Zoeller said.

"It is more important than ever for people to continue to search for themselves, and their family, friends and neighbors. I want this money to find its way back to the rightful owners."

The attorney general's office announced that in Putnam County, 217 properties were returned to local residents for a total returned value of $87,461.38.

Back in August, Zoeller and his staff came to Greencastle to present a check to local resident Kent Mecum, a retired DePauw University professor who received an undisclosed amount ("significant money" officials said) in interest and dividends from 13 different stock properties he once held in a company.

Zoeller said making a claim with the Attorney General's Unclaimed Property Division is free and easy. He encourages all Hoosiers to visit www.IndianaUnclaimed.com to search for unclaimed property.

In the last several months, businesses and other holders have turned over more than $121 million to the state of accounts in which there has been no activity for several years, depending on the type of account.

Less than one percent of unclaimed assets are tangible, physical items, such as those found in safe-deposit boxes. It is important to note that unclaimed property does not include abandoned vehicles or real estate.