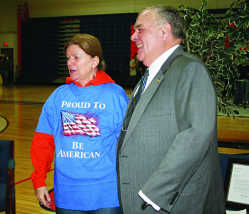 ROACHDALE -- North Putnam High School begins each morning with the Pledge of Allegiance. For 10 years, Spanish teacher Maria Wilson has repeated those 31 words with her students.

For the last two days, she has done so as a fellow United States citizen.

"Now we are all the same," the Brazil native said Friday.

Shortly after Friday morning's Pledge, all faculty and students of the school were called to the gymnasium for an unannounced convocation.

When Wilson arrived, Principal Alan Zerkel called one more person to the front of the assembly.

"Ladies and gentlemen, I'd like to present our newest United States citizen," Zerkel said.

Wilson strode to the middle of the gym looking happy, if slightly embarrassed.

"I'd like to say thank you to you all. I did not know about this," she said. "And I am very proud to be a United States citizen."

The morning was a chance for a pair of state officials to congratulate Wilson on her citizenship and for students to learn a little bit about the naturalization process.

"As you said the Pledge of Allegiance I thought, I'm sure that has new meaning to Mrs. Wilson," Baird said.

State Sen. Connie Lawson of Danville could not be in attendance, but sent a letter of congratulations.

"This triumph is not one to be taken lightly," Lawson wrote. "North Putnam High School and the state of Indiana are lucky to have a woman like you living here."

While introducing the program, Assistant Principal Jason Chew told the students what Wilson had to go through to become a U.S. citizen. These include legally residing in the country for at least five years, having good moral character, passing an English test and a U.S. history and civics test.

Chew gave the students examples of questions on such an exam.

* Before he was the president, Eisenhower was a general. What war was he in?

* Who lived in America before the Europeans arrived?

* The House of Representatives has how many voting members?

* What is the economic system in the United States?

"Mrs. Wilson had to have a score of 80 percent or higher in order to pass this assessment. Did you know the answer to at least three of those questions?" Chew asked the students. "If not, ask Mrs. Wilson -- Brazil native -- those questions about your country."

Of course, the test might well have been a breeze for Wilson, who has mastered three languages. As a Brazilian, her native tongue is Portuguese. In her profession, she teaches Spanish to English-speaking students.

Wilson has lived in Roachdale with her husband, a native Hoosier, since 1998. She has taught at North Putnam for the last decade.

"We have been married 14 years but we don't have kids. My kids are my students," she said.

Wilson has had a green card since 1999, but it was due to expire in November. She had the choice of renewing the card or becoming a U.S. citizen.

"Now I have both nationalities -- Brazilian and American."