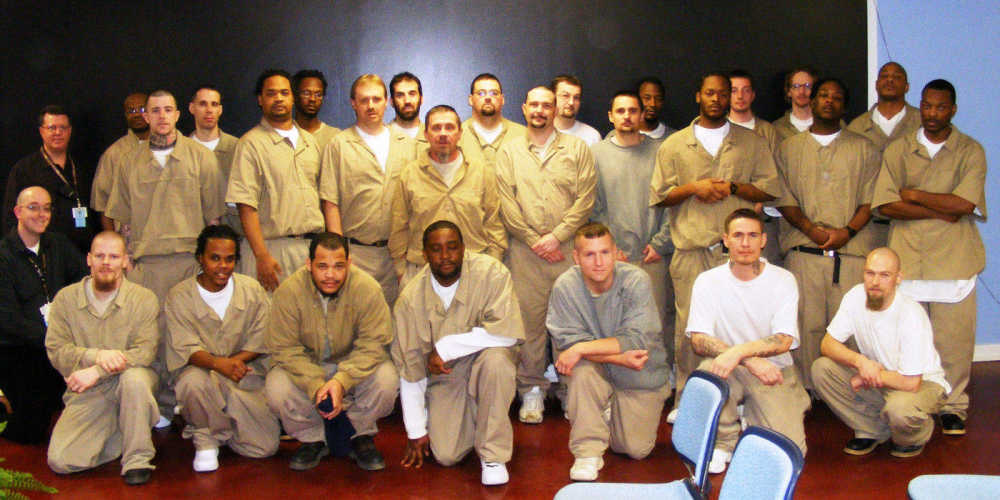 PUTNAMVILLE -- Offenders at the Putnamville Correctional Facility were recognized for their achievements during an Inside Out Dads graduation ceremony conducted Friday, Feb. 17.

In the presence of family members and staff, Program Coordinators James Bennett and Dwaine Short presented 29 offenders with certificates for successful completion of the Inside Out Dads Program.

"This hasn't been a walk in the park, but you've impressed me with your desire to become better fathers," Bennett said as he addressed the graduates. "When you get out, it will be your opportunity to teach your kids to make better choices than you did."

Offenders Antwan Henry of Evansville and Kristopher Chambers of Marion were featured speakers at the ceremony.

"You have to be the change that you want in the world," Chambers said, "and being a better dad is part of that change."

Henry told the graduates, "We learned about the important factors of helping us to be open for change, valuing the other person, being mindful, and most importantly, the role of the father."

Inside Out Dads is a 12-week, comprehensive re-entry program designed to promote the well-being of children through responsible parenting.

The curriculum provides instruction on positive communication, child development and motivation to enable offenders to reconnect with their children, both during and after imprisonment. Evidence shows that maintaining and reconnecting family relationships play a significant role in reducing recidivism.

"Incarceration can be a vicious cycle that negatively impacts entire family units, especially children," Putnamville Supt. Stanley Knight said. "We've done our best to inform incarcerated fathers of the tough realities that they face and of the difficult decisions that lay ahead.

"I am encouraged by the sentiments that they've expressed today and hope that they dedicate themselves to an even higher level of responsible parenting after their release."