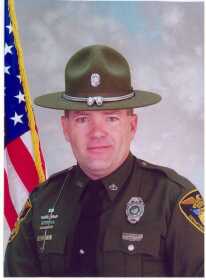 CLOVERDALE -- Master Indiana Conservation Officer Tom Lahay has been selected by his peers as the District Five Officer of the Year and nominee for the Law Enforcement Division's 2011 coveted James D. Pitzer Award.

A native of Warrick County, Officer Lahay graduated from Castle High School. Upon graduating with honors and two degrees from Vincennes University in 1982, Officer Lahay began participating in the selection process to become an Indiana Conservation officer.

In 1985, Officer Lahay was accepted into the Indiana Conservation Officer Recruit School and was subsequently appointed as a probationary officer assigned primarily to Sullivan County in District Five, where he has remained throughout his career.

During his career, Lahay has served as a search and recovery diver, sonar operator, canine handler, firearms instructor and armorer.

"Officer Lahay is a competent, dedicated law enforcement officer," Hutchins praised, "possessed of mature judgment and discretion. He is committed to the overall mission success of the agency and he is an asset to both the district and the law enforcement division."

Officer Lahay will compete for the Pitzer Award along with the nominees from all 10 Indiana districts. The award's namesake, Officer James D. Pitzer, was killed in the line of duty.

Selection will be made by the Law Enforcement Division Command Staff based on overall professional bearing, dedication to the law enforcement profession and service to the public.

Officer Lahay resides in rural Sullivan with his wife and daughter.