Jordan returns to 'second home of my youth' 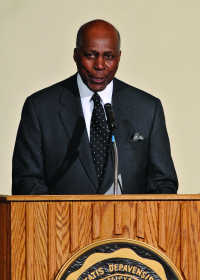 "Looking out at this audience and standing in this historic building, I am reminded that it is a wonderful, marvelous experience to return to one's alma mater -- that shining place John F. Kennedy once called the second home of our youth," Vernon Jordan said Sunday night at his alma mater, DePauw University.

He recalled coming to DePauw as a freshman from Atlanta in September 1953, the only black student in his class and one of only six African Americans on the Greencastle campus.

Speaking in Meharry Hall of historic East College, where he won an extemporaneous speaking contest during his first year as an undergraduate, Jordan told the crowd the university gave him an understanding of the world and friendships that have lasted a lifetime.

On his graduation day, as his parents drove him from the commencement ceremony at Blackstock Stadium, Jordan realized, "I had found a new home here, the second home of my youth. And I realized further that as comfortable as I felt here, the work of a lifetime beckoned.

"So my hope for the next 175 years is that students of this great university of all colors and backgrounds will find a home here at DePauw and that they will then leave the comfort of these hallowed walls to go out and make the world a better place," Jordan said. "I can think of no greater tribute one can pay to this great university than to urge it to continue producing graduates who do just that."

He has also served as an adviser to American presidents, and was on campus three months ago to introduce his good friend, America's 42nd president, Bill Clinton, who delivered an Ubben Lecture before 5,000 people in the Lilly Center.

The struggle of the civil rights movement has resulted in a better nation, but there is still work to be done, Jordan said Sunday.

Jordan recalled that his grandfather, at age 70, was asked what his greatest wish was. He replied that he yearned to "go to the bathroom indoors, in a warm place, one time before I die -- my grandfather's life was so blinded by segregation, discrimination and dehumanization that his highest aspiration was a basic creature comfort"

"I am, at 76 years old, forever reminded, edified, sanctified, yea, even tormented by my grandfather's experience. The shutters of my grandfather's life were so closed that he could see no future for his grandson Junior or for himself. But thanks be to God, the shutters of my life and many others are sufficiently open that we can aspire to higher ground. But only if we learn and continue to learn, and learn at institutions like DePauw, and learn from each other."

An advisory member of DePauw's Board of Trustees, Jordan -- who majored in political science as an undergraduate -- earned his law degree at Howard University Law School and honorary doctoral degrees from more than 60 colleges and universities in America, including DePauw. He's received many awards, including the DuBois Medal and Spingarn Medal.

"I believe in American democracy, I believe in the free enterprise system," he said. "I have seen America change. I have had a hand in that change and I have been a beneficiary of that change, as have so many others.

"So as I look out at this DePauw student body," Jordan continued. "I know that you are capable of great things. You inherit not just a tradition, but a responsibility -- a responsibility to push progress further still. You are the ones who welcome new experiences and challenge old stereotypes, who see things you know to be wrong and try your best to make them right."

Jordan's speech was followed by a question-and-answer session led by John Dittmer, professor emeritus of history. The civil rights legend called poverty and the income gap "a real problem" that could lead to unrest.

Speaking about the partisan nature of Washington today, Jordan noted, "I truly believe this -- that bipartisanship suffered greatly when (Washington Post publisher) Katherine Graham died, because her parlor was a convening place, and nobody said 'no' to Kate Graham ... A Republican senator and Democrat senator who had been screaming at each other all day long, at seven o'clock that night they'd be together in her parlor, and in the corner of that parlor they could work out a deal. That's kind of gone. It doesn't happen anymore."

Before he began his remarks, Jordan pointed in the audience to "probably the only professor at DePauw who taught me who is still alive," John Baughman '48, professor emeritus of history, who received warm applause.

Earlier in the day, Jordan provided a special narration during the DePauw University Band and Orchestra's "Music of the 21st Century" closing concert in Kresge Auditorium.

He was featured in New Morning for the World: "Daybreak of Freedom," a piece written in tribute to Martin Luther King Jr. by guest composer Joseph Schwantner.