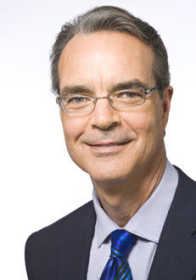 James B. Stewart -- Pulitzer Prize-winning journalist, bestselling author, columnist for the New York Times and 1973 graduate of DePauw University -- will deliver the principal address to DePauw's Class of 2012 at his alma mater's 173rd annual commencement.

The ceremony will take place at 10:30 a.m. Sunday, May 20 in Holton Memorial Quadrangle.

The author of the "Common Sense" column for the Business Day section of the New York Times, Stewart won the Pulitzer Prize for Explanatory Journalism in 1988 for his articles in the Wall Street Journal about the 1987 dramatic upheaval in the stock market and insider trading.

Named page one editor of the Journal in 1988, Stewart left the paper four years later to found SmartMoney magazine.

He is the author of 11 books, including "Den of Thieves," "Disney War: The Battle for the Magic Kingdom," "Heart of a Soldier: A Story of Love, Heroism and Sept. 11th" and "Tangled Webs: How False Statements are Undermining America from Martha Stewart to Bernie Madoff."

Stewart, who traces his career back to a term as editor of The DePauw, has been honored with the Edgar Award, the George Polk Award, the Elliott V. Bell Award and Gerald Loeb awards in 1987, 1988 and 2006.

A member and past chairman of DePauw's Board of Trustees, Stewart serves as Bloomberg Professor of Business and Economic Journalism at CUNY.

Stewart was the recipient of DePauw's Young Alumni Award in 1988, an Alumni Citation in 1988, an honorary Doctor of Journalism degree in 1989, and the Old Gold Goblet in 2009.