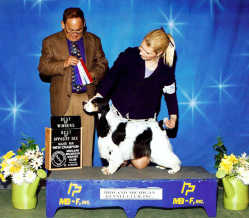 But now, you can just call her "Champ."

Lewis and her 2-1/2-year-old prized pooch recently won Best of Breed at the 2012 Hoosier Winter Classic, the Hoosier Kennel Club Show staged at the State Fairgrounds in Indianapolis.

"Jewel is a young dog," Lewis said, "but she has had some very nice wins."

Jewel even qualified for the 2012 Eukanuba Invitational before 2011 was over.

But it's still a dog-eat-dog world out there, and Lewis felt the bite.

"I have traveled the dog circuit as a handler and carried my own string of dogs," she said. "But the economy fell apart, and I was no longer able to support financially my family, which is why I went back to school." 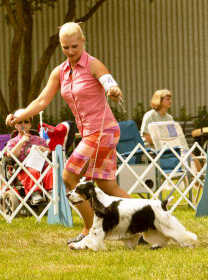 Lewis puts Jewel through her paces in an earlier competition.

With life rudely intervening, Lewis was unable to take Jewel to the competition in Florida.

"I didn't have the money," she said. "I needed to buy a new computer."

A fulltime student studying nursing at Ivy Tech, Lewis doggedly aspires to go into neo-natal infant care when she graduates in May.

Jewel is the first group-winning dog her Sunburst Kennels operation has ever produced.

"Jewel is the pride and joy of my kennel," Lewis said. "Jewel is a dynamite show dog, who works out on a treadmill four days a week. And usually the days she has off, she is at a show."

Dog breeding and show competition has always been a family affair for Lewis, who has lived in Greencastle the past two years after moving from Monrovia with her three children. She has even run a breeding operation with her mother and aunt.

"My mother got into dogs in 1976 with my father. They are the founders of Sunburst English Cockers. I came along in 1978 and was born into the dog world," Lewis said. "I started showing dogs at the age of three. My parents would turn me loose in a ring and let me 'play dog show.' From there, my desire to show dogs grew and grew."

And now she has passed that ambition on to her own children.

"This year my two younger children (Wyatt, 13, and Jesse, 11) showed in their first-ever AKC (American Kennel Club) show," she beamed.

"They make this a three-generation family deal," Lewis said. "But I have not pushed the dogs onto my children. I feel they need to write their own destiny. They have begged me to try it, and I broke and allowed it to happen."

Both boys placed fourth in their classes (separate via age) in their initial show outing.

"I am very proud of my children as they have done well with very little teaching from mom," she said. "Jesse currently is waiting for 4-H to start so he can work Zircon (incidentally, the other dogs in the litter are named Diamond, Jade, Onyx and Sapphire) in obedience and attempt his CD (companion dog obedience). Wyatt is borrowing my old retired dog so he has a dog to show."

In her younger days, Lewis and her beloved English Cocker Spaniel Kelly qualified for the famed Westminster Kennel Club show five times. She was able to attend the New York show only once, at age 15.

"I was the No. 1 junior handler handling ECS (English Cocker Spaniels) for five years running," she noted. "I also was ranked nationally in the top 10 in the U.S. all those years. As a teen, I won several best juniors at National where only ECS were being shown, so you could say Kelly started it all for me."

Where it ends up is still to be determined.

"My dream for Sunburst? To make a mark in the dog world," Lewis said. "To make Sunburst a legacy like those great kennels from the past. To me, Sunburst is a household name, but I want others to feel the same."