ISO to play 'The Planets' and 'Adagio for Strings' at DePauw 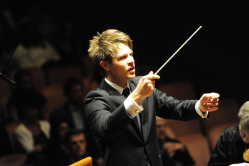 The concert begins at 3 p.m. in Kresge Auditorium, located within DePauw's Judson and Joyce Green Center for the Performing Arts.

Tickets are $10 at the door, with $5 seats available for DePauw students and senior citizens. However, as a special gift to the community from the DePauw School of Music, free tickets may be picked up at the Green Center box office from noon to 4 p.m. in advance of the concert. Learn more by sending an email to greencenter@depauw.edu or by calling 658-4827.

The ISO's DePauw performance will open with American composer "Adagio for Strings," which famed conductor Arturo Toscanini premiered on his national radio broadcast in 1938. The expressive, melancholy work quickly elevated the composer's popularity and is regularly played in concert halls around the world and used in many award-winning films.

Following the "Adagio for Strings," De Pue and Maestro Urbanski will collaborate with the Orchestra to present "Second Violin Concerto," a fiery and expressive piece that was inspired by Polish folk tunes that the composer melded into one continuous movement by combining the four diverse themes together with stunning cadenzas.

The concerto expresses a full range of musical elements, from slow and controlled passages to dramatic musical fireworks, that showcases the scope of the soloist's technical artistry.

Following intermission, Urbanski -- the nation's youngest conductor of a major orchestra -- and the ISO will perform Holst's colorful and picturesque suite "The Planets" in which the composer derived his inspiration from astrology and mythology.

Holst gave each planet a particular personality such as Mars, The Bringer of War; Mercury the Winged Messenger; Jupiter, The Bringer of Jollity and Neptune, The Mystic. The first complete performance of the suite took place in November 1920 with the London Symphony Orchestra where it received immediate acclaim. The work remains a favorite among audiences today.

The ISO's second visit to DePauw since last spring is part of a multi-year education and community outreach partnership between the ISO, the University and the city as a result of Greencastle being designated a Stellar Community by the State of Indiana.

Founded in 1884, the DePauw University School of Music is one of the nation's oldest private institutions for post-secondary music instruction and the longest-running in Indiana.