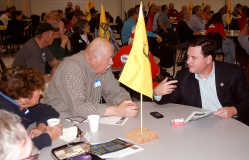 Prior to speaking to the crowd Monday night, Republican Congressman Todd Rokita (R-4th) takes time to talk with Putnam County residents like Barbara and David Lane of the Greencastle Defenders of Liberty group.

He recounted the story of how an elderly woman poked a bony finger into the chest of Franklin as he left an assembly of the Continental Congress, imploring him with "Sir, what kind of government have you given us?"

"A republic, if you can keep it," stands as his historic response.

Rokita let that statement sink in on the ample crowd at the hangar portion of the Dixie Chopper Business and Conference Center at the Putnam County Airport.

"Well, we are at that 'keep it' point," Rokita stressed.

He advised the crowd that as Americans, "we have to get out of our comfort zone if we're going to save this Republic. And we need to start here, in places like Putnam County."

Rokita is in his first term as Indiana's 4th District congressman, and if he is successful in the 2012 election, the Republican officially will begin representing Putnam County for the first time in January 2013.

On Monday, he spent much of the afternoon visiting two Greencastle industries -- Heartland Automotive and Buzzi Unicem USA (formerly Lone Star), listening to their concerns about excessive governmental regulations. 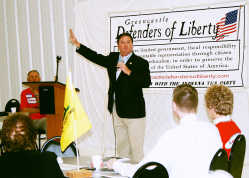 "It was good stuff," Rokita told the Banner Graphic before venturing out to the airport for the Defenders of Liberty session. "Obviously I saw a lot of good, hard-working Hoosiers who have a good work ethic and show up on time and are productive, all of which are traits that are becoming harder to find in the United States.

"Mostly though we talked about regulations and how they are just killing their business."

Unfortunately, Rokita said, the people in Washington that he works with on a day-to-day basis "have no appreciation for that" and continue to create and/or enforce unnecessary and overly burdensome federal regulations that "inhibit growth and slow the economy."

Ironically, one of the few sectors that has been growing recently in the employment area, Rokita said, has been government. But that actually has had an adverse effect on American business and industry, the congressman suggested.

"These new hirees then go out and try to find problems," he said of a young gung-ho group that he is now battling with an initiative he calls "Red Tape Rollback."

Rokita said that initiative, created in partnership with the Indiana Chamber of Commerce, has pointed out 70 such unnecessary regulations with 25 victories since last May.

"None of these regulations will make big headlines," he said, indicating that the focus is more about Congress' Second Constitutional Amendment duty of oversighting the Executive Branch of the government.

Prior to attending the local Tea Party meeting, Rokita said he expects Indiana to be the state that leads the charge against a fiscal crisis that has put the country $15 trillion in debt.

He is calling for across-the-board spending cuts, not just emphasis on social programs, but "this includes war spending," the Hoosier congressman said.

"We have lost that luxury of being the world's policeman -- and it is a privilege -- because of the way we have fiscally conducted ourselves."

Sixty-six percent of that $15 trillion debt is attributable to Medicare, Medicaid and Social Security, Rokita said, resulting in red ink the "children of tomorrow, not yet born, will be paying for."

To combat that, Rokita has introduced the State Health Flexibility Act, which would combine federal funding states receive for Medicaid and CHIP (the Children's Health Insurance Program) into a single block grant that allows states to design their own programs according to the needs and priorities of their own citizens.

The bill addresses rampant waste in the Medicaid system, reduces financial burdens to states by reducing excessive federal regulations, and encourages cost savings at the state level, Rokita said, claiming it could result in a $1.8 trillion savings.

"It is clear that Medicaid does not work," he added. "The millions of struggling families who depend upon Medicaid are faced with lengthening wait times and sometimes no doctor at all to treat themselves and their loved ones. It is unthinkable that we would continue to pile debt on our children and grandchildren to fund Medicaid that we all recognize is not working.

"The State Health Flexibility Act will fundamentally reform Medicaid and provide a vastly better service for Americans who depend on it, without cutting a single penny from current funding," he said.

"We must take this opportunity to make Medicaid more affordable, more accountable, and provide better care to the people who need it most."