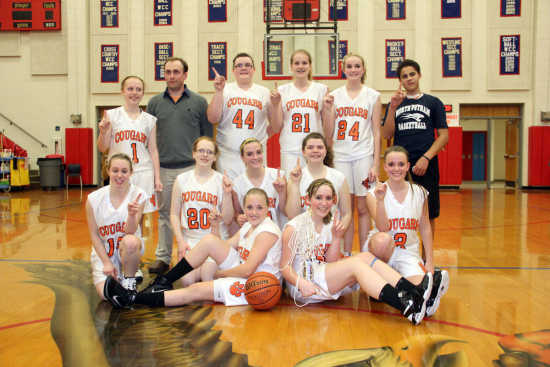 After an overtime thriller in the seventh grade county championship, the eighth grade game proved to be equally exciting as North Putnam overcame a three-point fourth-quarter deficit to come away with a 28-25 win and the county crown.

"It was great," he said of the sweep. "What was kind of the most exciting was seeing the progress of the girls all year long because as it goes with any coaching, you kind of go in ebbs and flow. I was really happy they came together at the right time and they played their best basketball in the last two weeks.

"What's even better, in every game we've won the past two weeks, we've been down. They've showed a lot of heart and determination to come back and put it away at the end of the day. That's been the mental toughness we've been trying to teach all year," Knapp added.

North Putnam held a slim 6-5 advantage after the first quarter, but was outscored 8-4 in the second period to enter halftime down 13-10 to the Tiger Cubs.

Greencastle extended its lead in the third, starting the second half with a 6-2 run to seize a 19-12 advantage. However, North Putnam was able to capitalize as the minutes ticked away in the quarter and fought its way back to within three points, 21-18.

Madisyn Smith pulled the Cougars within one at 21-20 early in the fourth quarter. Greencastle's Allison White hit a basket to make the lead three points. Adriana Millican cut into that lead with a basket and had Greencastle clinging to a one-point lead at 23-22.

Two free throws from Hannah Gray at the 2:32 proved to be the game-winning points as they lifted North Putnam into the lead 24-23. Jenny Heron tacked on four late points to move the score to its final tally of 28-25.

Knapp said the key to the championship win was the fact that girls stepped up on the night as the GMS defense focused in on the Cougars' top two offensive threats.

"Getting contributions from the most unlikely players on offense, because they (Greencastle) really did a great job on defense. We played them earlier this year and they really beefed up the defense and they really went after our two best scorers. In the second half, the third quarter especially, we had contributions from Rachael Engle, Maddi Smith and Hannah Gray on offense in ways we haven't seen all year. That's what really put us over the top, because Greencastle is a heck of a team," Knapp said.