Connie Lawson (R-Danville), who has served most of Putnam County as District 24 state senator the past 16 years, was appointed Friday as the new Indiana Secretary of State, effective immediately.

Indiana Gov. Mitch Daniels made the announcement at noon Friday. Lawson had tendered her resignation to Senate Pro Tempore David Long earlier in the day.

"Connie was an obvious choice," Gov. Daniels said. "Indiana has probably never been served by a Secretary of State better prepared on day one." 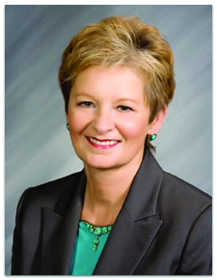 Until stepping down from the Indiana Senate Friday, Lawson had chaired the Local Government and Joint Rules committees and has been a champion of local government reform efforts, authoring a bill this year to reduce nepotism and eliminate conflicts of interest.

Majority Floor Leader and a senator since 1996, she also spent six years chairing the Senate Elections Committee and has continued to serve as a ranking member.

"Today, I am honored," Lawson said. "I thank Gov. Daniels for placing his trust in me to serve as Indiana's secretary of state. Although it is sad to think of leaving the Senate and no longer serving the constituents of Senate District 24 in the same manner that I have for the last 15 plus years, I am excited to bring my experiences as a county clerk and chair of the Senate Elections and Local Government committees to this position.

"The opportunity to serve all Hoosiers, Republicans and Democrats, across our state is a responsibility I take very seriously," she added.

She also served as president of the Indiana Clerks Association and chaired the group's legislative committee.

"Connie Lawson is the consummate professional: bright, hard-working, dedicated, and of the highest integrity," Senate Pro Tempore Long praised. "She is also one of the finest people you will ever meet. She will be an outstanding secretary of state for the people of Indiana, and will prove to be a very popular choice.

"We will miss her greatly in the Indiana Senate, where she has been both a valued leader and a respected and trusted colleague. However, our loss is the people's gain, and we look forward to working closely with her in the ongoing effort to improve the lives of Hoosier families throughout our great state."

"As a small business owner, state senator, and former county clerk, Connie Lawson brings a wealth of knowledge and experience to the office of Secretary of State. I have witnessed her in action for more than 20 years," said Skillman, who performed a ceremonial swearing Friday. "When she assumes a responsibility, her level of performance is outstanding. She will continue to serve with distinction and make Hoosiers proud."

Ed Simcox, who served as secretary of state from 1978 to 1986, seconded Skillman's assessment.

"I can't think of anyone who is better suited than Connie Lawson, by virtue of skills and experience, to assume the duties of the secretary of state's office," Simcox said.

"Her expertise as a county clerk and as the ranking member of the Senate Elections Committee has ideally prepared her to serve as the state's chief elections officer. The Secretary of State's office has other important regulatory responsibilities over corporations and securities. Her business background has prepared her to make those functions of the office consumer friendly. I can also say that Sen. Lawson is highly regarded by her Senate colleagues in both the Republican and Democratic ranks."

Lawson said she was eager to begin the new position.

"I look forward to getting started, meeting with the dedicated men and women in the various divisions to ensure that the secretary of state's office is as efficient and effective as it can be. I also would like to thank Jerry Bonnet for serving as interim secretary of state. I applaud his work and am grateful for his service during this transition."

Bonnet was appointed interim secretary of state on Feb. 4 in the aftermath of the removal of Charlie White. Bonnet has resigned from the interim role and will return to his previous duties.

She and her husband Jack reside in Danville and own Lawson & Co., an auctioneer and real estate company.