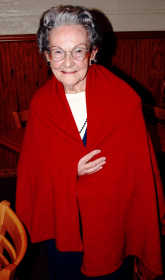 The lady in red Thursday is Delores Risk, showing off the shawl she received for her 90th birthday Wednesday from friend and visiting International Exchange Homemaker Yvonne Moore of New Zealand. The warm wool shawl, from McDonald of New Zealand, is made of possum and Merino sheep's wool.

Apparently, when a New Zealander makes a promise, it's a vow to remember -- even if it means traveling halfway around the world to attend a birthday party.

That's just what Yvonne Moore of Nelson, New Zealand, did this week.

She made a return trip to Putnam County for the second time in 24 years to attend a 90th birthday celebration for fellow International Exchange Homemaker Delores Risk of Roachdale.

Moore will spend a week with Risk, returning to the scene of their first meeting when Moore was the International Exchange Homemaker to Indiana and IEHA (Indiana Extension Homemakers) in spring 1988.

"I was invited to a weekend party for Yvonne at the Risk family farm the very first week that I began my job working with Putnam County Extension Homemakers 24 years ago," Baumann recalled Thursday at the Putnam Inn.

Moore returned to Indiana in 2007 (19 years to the day she came in 1988, she remembers) to visit the friends she made during her 1988 exchange. Risk was celebrating her 85th birthday at that time, and Moore promised to come back to celebrate Delores' 90th birthday.

She also invited all of her Indiana friends to come to New Zealand.

Of course, Risk has already done that.

"We went to New Zealand in 1992 on our 50th wedding anniversary, she said. "It was beautiful. We had a wonderful host and hostess.

"I think I saw a million sheep," Delores smiled, recalling that her sons showed sheep at the Putnam County Fair.

"We made national headlines," she recalled of those sheep. "We had one ewe give birth to five sheep at once. (The Banner) came out and took a picture and put it on AP (Associated Press). We heard from people all over the country." 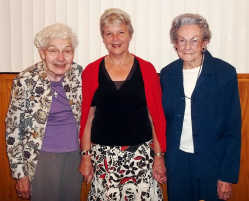 And now the world, as Moore keeps in touch.

Moore is retired now, enjoying her crafts, a large garden and especially her grandchildren.

"It's just a thrill to be back," Moore said, "and visit with friends again. It's a real privilege."

The Exchange Homemaker program is supported by an IEHA "Coins for Friendship" program, which is the collection of free-will donations to help support international understanding of people around the world. Each year the Coins for Friendship donations, which are collected throughout the year, are sent to the IEHA state treasurer.

"Virtually every year Putnam County is the top contributor to this fund," Baumann said.

She indicates that very likely could be due to the fact Putnam is the only county in Indiana that has had two members serve as the Exchange Homemaker to another country.

Delores Risk went to Columbia South America in 1978 and Barbara Brookshire was the Exchange Homemaker to Scotland in 1985.

A few years ago Putnam County came close to having a third Exchange Homemaker picked, when Thursa Evens was selected at the alternate for the exchange with South Africa.

Indiana is presumably the only state whose Extension Homemakers have such an international exchange program, which has now been in existence for more than 30 years.

The program is more or less on a three-year cycle, during which time IEHA selects and pays to send a homemaker from Indiana to a foreign country for approximately six weeks to visit and learn about the host country and then they also pay to host an exchange homemaker from that country to come and visit Indiana for six weeks.

During the six weeks the visiting homemaker travels around the state visiting and living with members of IEHA. Near the end of the visit, the Exchange Homemaker attends the annual Home and Family Conference at Purdue University and gives a talk to members of IEHA at their annual meeting. The International Exchange Homemaker from Indiana is also expected to travel around the state upon her return to share her experience as well as to give a program at that year's Home and Family Conference.