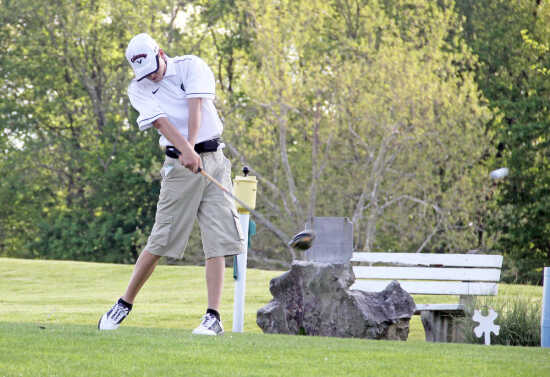 Cloverdale golfer Rylan Mattocks hits a strong drive off the No. 12 tee during Thursday's four-way match. Cloverdale placed third with a total of 192.

Golfers not only had to contend with a tough course, but also tough conditions as the winds would go from a calm breeze to a tree-swaying gust in seconds. Also days of heavy rains made it crucial for strikers to keep out of trouble.

Brody Pfaff led the Clovers with a round of 46, with Rylan Mattocks closely behind after carding a 47. Colte Tomlinson shot a 49, while Aaron Whitlock shooting a 50. Freddie Fislar shot a 52 and Cody Atwood rounded out the scoring with a 61.

Cloverdale head coach Doug Wokoun pointed out to his team following the round that overall they shot well, but there are one or two holes that bring their scores down. He said those holes are a product of his team no having the experience under their belts to know how to put a full round together.

"This is where a lot of the inexperience is in managing the golf course," Wokoun said. "We'll do some things well and I think we get a little bit relaxed and the suddenly when we relax, we do something wrong and then we have to try to fix it. I think tonight what happened was, for the most part with one exception, the top six started well and then got themselves into trouble when they started to relax.

Things begin to heat up for the Clovers as they have the county match next Thursday, conference next Saturday and sectional only a few short weeks away. Wokoun said his team needs to realize the kind of golf they are capable of playing as the big matches approach.

"We have two matches during the week and then conference next Saturday," Wokoun said. "Then we have three matched the following week, so we have a lot of golf to play in a very short period of time. I like the progress that we're making individually; we just have to find a way to make it last through all nine holes.

"When we start to do that I think they'll find that we're a little bit better team than we play. We just have to get to that point."