Deloris "Jane" Laswell, of Brazil, daughter of Ralph and Mary Mustard, wife of Robert L. Laswell, passed away at home on Sunday, May 6, 2012. 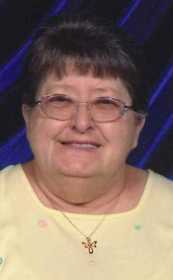 She is also survived by 16 grandchildren; eight great-grandchildren; one sister, Bell Killion; a brother, Ralph Mustard; and several nieces and nephews.

She was a member of Union Christian Church, the Emmaus Community and a lifetime member of the VFW Post 1127 Women's Auxiliary.

She was preceded in death by two sons, Gerald Clark and David Clark; both parents; three brothers, Steve, Danny and Richard Mustard; and two sisters, Joan Cox and June Cash.

Services will be conducted at 1 p.m. Thursday, May 10 at French Funeral Home, Brazil, with Pastor Mark Grayless officiating. Burial will follow at Croy's Creek Cemetery. Visitation will be from 11 a.m. Thursday until time of services at the funeral home.

At Jane's request donations to Vista Care Hospice Foundation 3401 S. Fourth St. Terre Haute, IN 47802-5501, would be appreciated rather than flowers.