By Michael Hadley, For the Banner Graphic 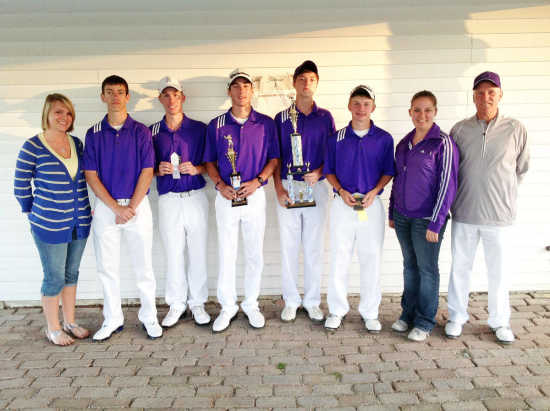 CLOVERDALE -- Greencastle boys' golf continued their dominate season by winning the Putnam County Golf Tournament, blowing past North and South Putnam as well as hosts Cloverdale on the nicest tournament day any of the coaches could remember. Greencastle won with a 160, with South Putnam placing second with 186, Cloverdale third with 190 and North Putnam fourth with 194. Tiger Cub Brad Haussin came away with the night's lowest score, a two-over-par 38 for the medalist spot.

The tournament, held at Cloverdale's home course at Clover Meadows, began a bit more rocky than any of the coaches would have liked to see. Whether it was nerves or some other outside force, each group continued to post high numbers for the opening hole, some shooting as high as a five-over-par nine.

"There's a lot of pressure on (the county tournament) mainly because there's a lot more fans here than we'd normally have at a golf tournament," proposed South Putnam head coach Brian McClure. "Sometimes it gets to them and sometimes it doesn't."

The third group to head out, however, had the worst luck of the day overall. Despite being the first foursome to successfully manage at least half of their approach shots onto the green on on the 10th, by the 13th things would begin to change for the worse.

After Greencastle's Luke Brotherton hit the pin on his approach, his ball rolled off into the rough behind the green. Clover Rylan Maddock's approach landed a few feet away from Brotherton's and each hit their next shots much too hard. North Putnam's Mason Asher attempted to turn his muddied approach into gold, but fell just a few inches short on his chip.

The only of the quad to escape a disappointing 13th was South Putnam's Alex Eickhoff who pushed an 18-yard putt into the bottom of the cup with military precision.

The easiest hole of the course is typically the short, 104-yard par three 14th. While most Thursday managed to nail the green from their tee shot with ease, the third group again ran into some major troubles. Asher fared the worst of the group, posting a disappointing four-over seven, but Brotherton swapped his misfortune from the previous hole for a beautiful shot that this time found the hole and stayed, his second birdie of the day. Maddock settled for a bogey on the hole, ending five-over on the last five holes.

"Ordinarily you would say we might understand positioning better," Cloverdale head coach Doug Wokoun said of the high scores overall Thursday night, "but part of that is executing the shot to get there, and for the most part tonight... we didn't position well."

Haussin, Greencastle's No. 1 golfer, was the only player to escape the misfortune for the majority of the day. The senior missed out on any miraculous birdie or eagle shots, but instead posted consistent pars, only slipping up with a double bogey on the especially difficult dogleg left 17th.

He was followed on the leaderboard by teammates Brotherton who shot a three-over 39, Raymond Stinson at a 41 and Alec Davis at a 42. North Putnam's Jon Willard came in fifth with a 43, Cloverdale's Zach Hall ended with a 44 and rounding out the All-County team was South Putnam's Derek Chestnut with a 45.

"I am pleased that our team score was below 200 and only eight strokes off of the third place South Putnam," Patrick said. "We are still achieving our goal of staying below 200 and that is still progress."

Even second place South Putnam felt they well enough, despite the overwhelming play of the Tiger Cubs.

"We didn't tear it up by any means tonight... and we gave up a lot of strokes down the stretch here or there," mentioned McClure. "We just didn't have enough to beat Greencastle. You have to give them all of the credit."

The West Central Conference tournament will be on Saturday at Deer Creek at 11 a.m.