He was born on Sept. 1, 1923, near Spencer, Owen County, Ind., to John Christopher and Nina Atlanta (Smith) Westfall.

As a boy, many of his summers were spent working on family farms. Jim graduated from Greencastle High School in 1942. There he excelled at sports, especially basketball.

Jim dreamed of an aviation career and wanted to serve his country, so with the onset of World War II he entered the U.S. Navy V-5 air cadet program. He completed pre-flight school courses at the University of Georgia (Athens) and went on to finish flight training at Pensacola Naval Air Station (Pensacola, Fla.). 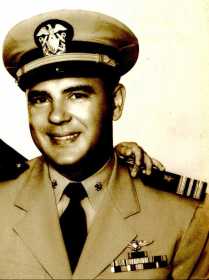 With his naval aviator wings and commission as an ensign, he was shipped to the South Pacific in 1944. In that theater of the war, he saw action primarily at the controls of the Douglas SBD Dauntless.

After his return from combat in 1945, he was based at Fort Lauderdale (Fla.) Naval Air Station. While there as a flight instructor in the Grumman TBM Avenger, he played a role in the search for Flight 19 -- the mysterious disappearance of five Avengers off the coast of Florida on Dec. 5, 1945, arguably the most famous aviation incident associated with The Bermuda Triangle.

Recalled to active duty, Jim was a flight instructor at Pensacola Naval Air Station before being assigned to the USS Boxer (CV-21) and USS Kearsarge (CV-33) during the Korean War. From the decks of these aircraft carriers he flew his favorite airplane: The Vought F4U Corsair. For part of this period he served as navigator aboard the oiler USS Chickaskia (AO-54).

In the 1950s, Jim piloted the Lockheed R7V Super Constellation for MATS (Military Air Transport Service). His transport flights from Hickam Air Force Base (Honolulu, Hawaii) took him all over the world and into Southeast Asia at the beginning of the Vietnam War.

He marked most of the 1960s with service in naval air reserve training commands at Jacksonville, Fla.; Glenview, Ill.; and Omaha, Neb. From 1967 to 1969, Jim was at the Pentagon (Washington, D.C.), where he was responsible for base programs on the staff of Vice Admiral Thomas F. Connolly, USN, Deputy Chief of Naval Operations (Air) and namesake of the Grumman F-14 Tomcat.

He retired from the United States Navy as a captain in 1971. Jim then moved to Longwood, Fla., where he worked in real estate for many years at Sweetwater Oaks and other developments. He relocated to Melbourne in 1990, settling at Indian River Colony Club (IRCC).

After high school, Jim married June Alexander of Greencastle in 1942 and together they had one son in 1943, James E. Alexander (nee James E. Westfall Jr.).

In private life, Jim was an outdoorsman who enjoyed fishing and hunting. An avid golfer, he was particularly proud of his 1997 hole-in-one.