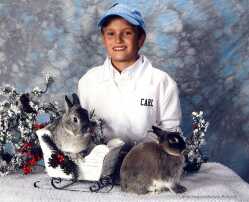 Three Putnam County students were among those honored for academic and extracurricular excellence during Lincoln Trail College's annual student recognition program on April 25.

MARTIKA BYRD of Cloverdale was recognized as a medical assistant (clinical).

Lincoln Trail is a community college located in Robinson, Ill.

TYLER J. WADE received a Bachelor of Arts degree from Wabash College on May 13 during the 174th commencement exercise.

Located in Crawfordsville and founded in 1832, Wabash is a private liberal arts college, which teaches men to think critically, act responsibly, lead effectively, and live humanely.

Two students from Putnam County were among the 2,000 students who received degrees during graduation ceremonies April 28 at Indiana Wesleyan University's main campus in Marion.

JILL BRIDGEWATER of Greencastle received a Bachelor of Science in accounting.

AMBER REEVES of Coatesville earned her Bachelor of Science in illustration.

Indiana Wesleyan University is an evangelical Christian comprehensive university of the Wesleyan Church.

More than 3,300 students are enrolled in traditional programs on the university's Marion campus. Another 12,500 adult learners attend classes at regional campuses in Indiana, Kentucky and Ohio, as well as online.

Established in 1980, Student Foundation is a group of 25 juniors and seniors with a 3.0 GPA or higher who are invited by current members to assist the president's office and the office of institutional advancement with events and programs. The organization aims to stay connected to the campus community, alumni and the greater Franklin community.

Heavin is the son of Melinda Heavin of Coatesville and a South Putnam High School alumnus.

CARL ELMORE, a fifth-grade student at Central Elementary, received great honors at the Indiana Arba Rabbit Nationals. Entrants from around the country brought more than 25,000 rabbits to the Indiana State Fairgrounds for the show.

Elmore competed in showmanship, in which he placed second. He was also on a breed ID team of four kids that won the event.

Elmore also entered the Montpelier Netherland Dwarf Nationals, at which he entered a competition in royalty. After taking a test, doing an interview and judging rabbits, Elmore won the title of prince.