By TIFFANY FRY, For the Banner Graphic 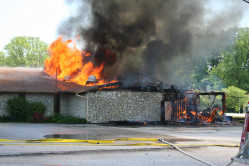 The Knights Inn office building, located near the intersection of State Road 59 and SR 42, caught fire and was destroyed Friday afternoon. No one was injured.

According to Jackson Township Volunteer Fire Department Chief Tom Champion, the cause of the fire is still under investigation. He told The Brazil Times a fire investigation will take place Monday with the State Fire Marshal's Office.

Two people were inside the building when the fire started; however, both escaped safely without any injuries.

During the two hours it took to bring the fire under control, Champion said part of the roof on the building collapsed.

Officials called REMC to turn off the power of the building.

"We used a large diameter line to supply the ladder and another ground monitor," Bennett said.

The fire was located in the office building of the hotel, which according to officials is owned by Chirag Enterprises, Inc.

"Everything worked according to advertised," Champion said of the response by fire departments. "If it wasn't for the new hydrants and the water tower, we would have had a problem."