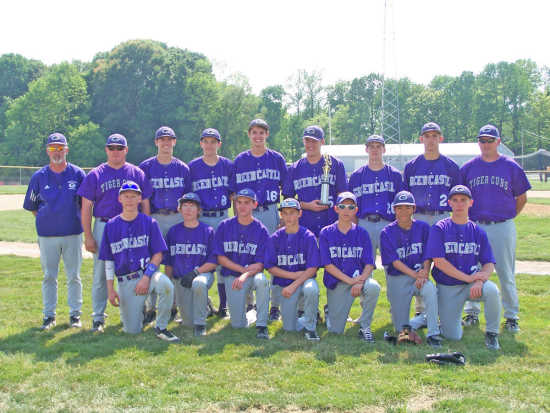 The Tiger Cubs reached the final game after defeating Cloverdale 11-1 earlier in the day. Tanner Nicholson recorded all fifteen outs by strike out.

Brett Mangrum and Tyler Scott both had two singles in the game and Alec Pettit recorded a home run in the win over the Clovers.

Greencastle started off the championship game by forcing four walks and recorded seven hits, scoring 12 runs in the top half of the first.

The Cougars scored three runs in the bottom of the inning but could not muster much more offense after that as pitcher Seth Brown settled in and recorded 11 strikeouts in the five innings of play.

The Tiger Cubs scored four in the final inning on a series of singles and though the Cougars couldn't find a way to add any runs as Greencastle swept the baseball county titles.

Greencastle JV coach Travis Nicholson said that the squad kept focus at the plate and on the field.

"In the second game, we came out and hit the ball well right off the bat. We gave ourselves enough cushion where we were comfortable for the remainder of the game."

"Cloverdale and North Putnam were good match-ups and good games. We're proud of the guys today."