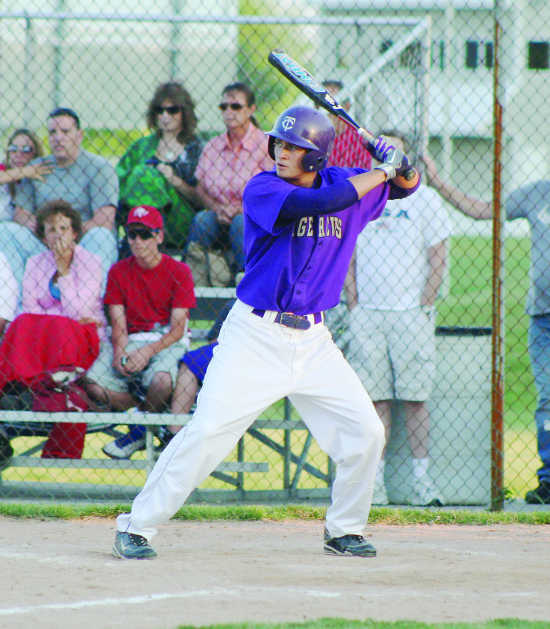 Greencastle's Ryan Battin went 2-for-5 at the plate with an RBI and a run scored Wednesday.
Order this photo

Baseball players have been following Wee Willie Keeler's words of wisdom since the 1800s. Unfortunately for sectional hosts Greencastle, Owen Valley followed the advice a little bit better on Wednesday.

The Patriots collected 10 hits on their way to a 9-5 sectional-opening win.

"This is a tough sectional. You have to play perfect baseball to win this sectional," GHS coach Troy Remsburg said. "You can't have mistakes. We hit the ball, just hit it right at them. They hit the gaps. That's basically the difference in the game."

The "visiting" team on their home field, the Tiger Cubs (13-10) hit a pair of long flyouts to open the game, followed by a pair of hard hit ground balls, the second of which ended the inning.

The Patriots, on the other hand, lit up the scoreboard every inning. Nolan King hit a 2-run homer in the bottom of the first, giving Owen Valley a 2-0 lead.

The Tiger Cubs had their most successful inning in the second, answering with three runs on singles from Ryan Pettit, Nick Gilliam, Cole Pohlar and Dylan Harbaugh, followed by walks from Dylan Linton and Andy Bell.

After Patriot rally put three more on the board, GHS missed a golden opportunity. They loaded the bases with one out, but failed to notch any runs.

It was a theme of the night, as the Tiger Cubs stranded 10 runners, six of them in scoring position.

"We hit the ball hard, we just hit it right at them. Ryan had two real deep shots. Dylan had a deep one. Andy had two or three deep ones," Remsburg said. "It's hard to win games when you hit line drives right at people and they catch it."

With a 5-3 lead in hand, the Patriots continued to extend it, tacking on a run in each inning from the third through sixth.

Remsburg said his senior hurler Battin tried to battle through an injury, but struggled.

"Ryan was kind of hurt and I didn't know that until about the third inning," Remsburg said. "I went out and talked to him, asked if he was all right. He said, 'I'm OK, I'll just throw sidearm.' He knows his body better than anybody. He's thrown numerous pitches this year, probably more than three or four of our pitchers combined."

Later, the coach found out Battin had a lot of pain in his shoulder, what felt like a pinched nerve.

"I probably should've asked him a little sooner," Remsburg said. "I trust Ryan, and what senior wants to come out of a sectional game?"

The senior, who threw more than 1,000 pitches on his way to a 6-2 record, moved to centerfield after the third, having surrendered six runs on six hits.

With Hunter Mitchell taking over on the mound, the Patriots continued to grind out runs.

The Tiger Cub bats returned to life in the sixth, when Landon Miller drove in Battin. They tacked on another in the seventh when Batten singled home Pohlar.

That was the end of the scoring, though.

Patriot pitcher Logan Terrel played with fire all night, but finished with a complete game, allowing five runs on nine hits and seven walks, while striking out nine.

GHS seniors Linton, Bell, Pettit, Battin, Mitchell and Nick Hutcheson bowed out with a 13-win senior campaign and a special place in their coach's heart.

"They're kind of like a second family to me, this senior class. This is about the last class of kids that I coached in Babe Ruth, little league," Remsburg said. "I'm going to miss them. They're a special group of kids. It's hard to replace groups like that -- Andy, Hunter, Dylan, Ryan, the other Ryan -- I've had them in high school for four years, and Nick Hutcheson for one.

"I told the younger guys, come back with a hunger next year. These guys came back every year with a hunger, they didn't want to lose," he added.

Owen Valley will face West Vigo in the second round. The Vikings defeated South Vermillion 10-3 in Wednesday's early game.

Greencastle concludes the season with a 13-10 record.