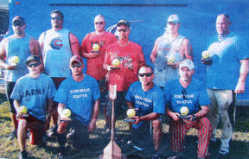 At the break of dawn, the snap of a pitch and the crack of a bat could be heard across the field at the Terre Haute Federal prison as teams from the Federal Indiana and Illinois Department of Corrections and various Indiana State agencies competed for the championship title.

As the games and the day progressed only two teams remained, ISF and the Federal Corrections Institution from Greenville. The rivalry between the two was palpable, but it was the undefeated ISF team that brought the championship home

"It was a long, hot day," said Kevin Daniels as he showed staff his sunburn. "I was so sore the next day, I could barely walk."

Tournament highlights included Trey Ellis being named as ISF MVP and recognition of Ryan Nicholson and Darrin Chaney who tied first place for hitting the most home runs on team ISF.

Chaney expressed his appreciation to the Federal Bureau of Prisons for hosting the event and to Federal Correction employee Regina Lopez for all her work organizing the tournament.

"We have a great time every year and look forward to the rivalry, all in good fun, reacquainting with old friends and making new ones," Chaney said.

"Staff members volunteer their off-duty hours to participate in extra-curricular activities between federal and state agencies," PCF Superintendent Stan Knight said. "Rapports are built and relationships are forged that foster open lines of communication, an essential part of this line of work."

So, for yet another year, the championship trophy will be displayed in the Administration Building at the Putnamville Correctional Facility.