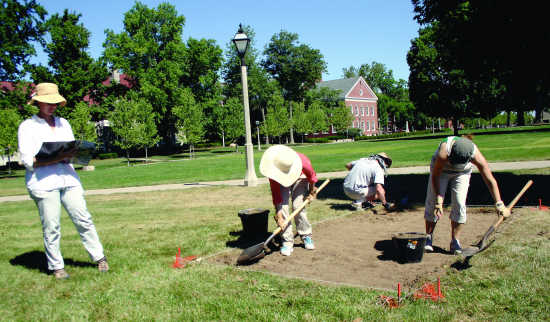 An archaeological dig is under way at the site of old Minshall Lab on the grassy area immediately west of the DePauw University Union Building. Associate Professor and Chairman of Classical Studies Rebecca Schindler (left) is overseeing the operation with Pedar Foss, associate professor of classical studies and dean of academic life at DPU. Assisting in the effort have been two student volunteers, Kat Raymond-Judy (in bonnet) and Danica Andersen (in cap), both sophomores from Minnesota.
Order this photo

Without an Indiana Jones fur fedora anywhere in sight, sunbonnets, caps and floppy hats had to suffice this week as an archaeological dig commenced on the DePauw University campus.

Likewise, the setting featured not the shifting sands of the Middle East, but crunchy, burned-out Indiana grass as four hearty souls braved Hoosier humidity and scorching sun to excavate the site of the old Minshall Lab building.

Minshall had stood west of the Union Building along the north side of Hanna Street from 1902 until it was razed in 1973 with the opening of the Julian Science and Math Center a stone's throw to the southwest.

The three-week excavation looms significantly this year as the creation of an historic map of the DePauw campus has become a byproduct of the university's 175th anniversary celebration.

Digging in the dirt beneath the shadows of East College is a first for both of the classical archaeologists. Neither has ever done a dig on American soil, let alone in Greencastle and at DePauw.

Yet it represents a remarkable opportunity, Schindler notes, reminding all that the site uniquely has been part of a college campus since 1837.

Hopefully, she said, any artifacts that are recovered will provide information "that we can't learn from the archives."

"One thing we'd like to know," Schindler told the Banner Graphic as Foss and two student volunteers -- Kat Raymond-Judy and Danica Andersen, both sophomores from Minnesota -- worked the initial level of soil at the dig site, "is where the building actually was."

That is because three historic campus maps, including a 1934 survey and a 1971 version done right before Minshall Lab met the wrecking ball, do not totally line up when put to the GIS (Geographic Information Systems) test.

While the group had hoped to establish the southeast corner of the old lab with the excavation, the uncertainty of that exact location made them a bit nervous.

"Archeology is a lot of luck," Schindler said. "We decided to put a trench here, and it might be the spot to help us undertake some sophisticated analysis -- or we might find nothing.

"If we go too far east, we could miss it entirely," she added. "So we decided to go for the next best thing, the south wall of the building. We had to balance catching a wide area of the building with what we could do in three weeks."

A trench two meters wide and four meters long has been opened. Although relatively small, Schindler said the equally narrow timeframe meant concentrating on a "manageable area to work in."

Plans are to go down a meter or a meter and a half to hopefully gain access to the foundation.

Ultimately the site will be the location of a new campus dining hall sometime in the near future, she said, indicating that helped drive the opportunity to dig in the middle of campus.

As the project continues, Schindler and Foss will provide weekly Trench Talks on site from 11:30 a.m.-12:30 p.m., starting this Friday and continuing June 22 and 29.

Encouraging the group as it endures long, hot days is the notion that buried in the ground could be rubble from Minshall's demolition.

Student Raymond-Judy said she read a story in the archives about the final days of the building and how the indomitable Jack Cook, the late longtime DePauw chemistry professor, took one last look around his beloved lab.

"When they tore it down, they left things inside that they didn't want or wouldn't need anymore," Raymond-Judy said.

"It (the story) describes Professor Cook going in to say goodbye to the building, and saying, 'Oh, look at the beakers.' Look at all this and that left in the building," the sophomore added.

Schindler and Foss hope local residents who may have worked in the building or attended classes there might come and share their experiences or go online and make comments (at bannergraphic.com or www.depauw.edu).

"We had a lot of good questions as well as personal stories about the lab, including tales of sneaking in at night via the fire escape," Schindler recalled.

It was during the alumni program that one woman raised her hand with an interesting comment.

"She said, 'I hope you're planning to dig with a Geiger counter,'" Schindler said. "There were always rumors about physics experiments in the basement."

Finding the basement would be a coup as well, Schindler indicated, for it could be full of relics or pieces of DePauw's history.

"Construction people will tell you it's easier to fill in a basement than dig it out," she said, alluding to the notion that pieces of Minshall or equipment left behind were likely toppled into the basement and covered over with dirt and debris.

Bits and pieces of the building actually still exist on campus.

The dedicatory plaque from Minshall Lab now hangs in the foyer at the Julian Center, while the prominent columns from the front of the old building were rescued from a campus scrap heap by Dr. Cook many years ago. They were later reassembled in the area just outside the Union Building terrace.

Meanwhile, the Minshall cornerstone is a bit mislocated, set several yards off to the northwest along the walkway that was once College Avenue before it was closed through campus.

An accompanying plaque reads: "On this site once stood old Minshall Laboratory (1902-1973). It was home to the Chemistry and Physics Departments. Through its doors walked DePauw men and women who went forth to enrich the world."

And in the dirt on that very site, some of them are doing a little of that still today.