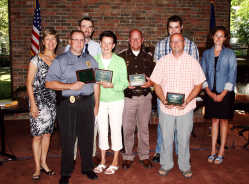 Digesting a mound of paperwork representing 15 City of Greencastle resolutions and the tax-abatement requirements of six local industries, Greencastle Development Center Director Bill Dory made an example of Heartland Automotive.

The local industry, celebrating its silver anniversary as part of the Putnam County community, stands out as an example of how using tax abatement as an industrial recruiting tool can have long-term benefits, Dory told the City Council Tuesday night.

Twenty-five years ago, when Heartland Automotive bought the old Ryan Building at 300 S. Warren Drive, it promised to bring 100 new jobs to a community that had just seen 985 positions lost with the closing of the IBM plant.

The 107,000-square-foot Ryan Building, which IBM used mostly for storage, had been built as a new facility for the Angwell Curtain factory.

The investment in equipment alone by Heartland over the past 25 years is "well over $50 million," Dory pointed out.

"I throw that out (as an example)," Dory continued, "because Heartland, currently celebrating its 25th anniversary, demonstrates what happens over a period of time by using abatement as a tool to help our community."

Broadening his view, Dory told the City Council that the six companies making their annual abatement reports to the city, represent 1,769 total jobs -- an increase of approximately 200 from last year.

In reality, the job figures are actually greater, Dory said, because the statement of benefits provided with the abatement reports do not include fulltime temporary positions or workers provided through employment services.

Local employment, Dory said, "is pretty much starting to come back."

The abatement reports also represent a cumulative total of $68.3 million in new equipment investment and $7.6 million in real estate.

Crown and IAC are making initial reports on their 2011 projects, Dory noted, adding that in 2013, the City Council will see compliance reports from Crown Equipment, Phoenix Closures, Chiyoda and F B Distro for projects started in late 2011 or announced in 2012.

"For example," he said, "Crown did not receive its Certificate of Occupancy (on its building expansion) until a couple of weeks ago, well after the March 1 assessment date."

Among other local industries, Dory noted that Walmart Distribution no longer has any abatements in place. They have all run their course over the company's 20-year tenure locally.

Meanwhile, anything relative to tax abatement compliance for Phoenix Closures, the plastic lid-making enterprise that has repurposed the old Greencastle Manufacturing/Oxford Automotive building on South Jackson Street, will not come before the Council until next year, Dory noted.

Garmong, he added, is on the list for tax abatement on the real estate at the spec building site on the roadway extension west of Fillmore Road.

The new building has been leased to Dixie Chopper (aka Magic Circle Corp.), which is employing 6-12 people in parts distribution there presently, Dory said.

The City Council waived the reading of the complete resolutions, instead reading the 15 documents by title only before their unanimous passage at the 90-minute meeting.