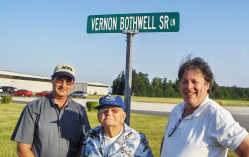 Memorial Day annually gives Americans a moment to remember the brave men and women who have gave the ultimate sacrifice for their country.

Recently a small group of relatives and friends of one local veteran who served during World War II and Korea honored him on his birthday. Sunday, May 20 marked the 90th birthday for Vernon E. Bothwell Sr.

Vern, as he is known, was honored both for his service to his country and to that of aviation.

Bothwell volunteered for service in June 1941, prior to the deadly attack by the Japanese at Pearl Harbor, Hawaii. He enlisted in the U.S. Army Air Corps, the predecessor to today's U.S. Air Force, and completed basic training, graduated from Air Mechanic School and then Line Mechanic School, all by Feb. 27, 1942.

With America then at war with Japan and the rest of Axis Powers, Bothwell was selected by his commanding officers to enter multiple engine flight school.

He earned his wings, and then went on to complete the training that would make him a "Pilot in Command." Bothwell would command a Martin B-26 medium bomber. At the time the bomber had multiple problems and had been labeled the "Widow Maker."

Bothwell successfully flew his bomber for 40 missions and then was allowed to come home in April 1944. Not satisfied with having already flown in combat, he requested and was finally granted permission to train on the P-51 fighter. He entered flight training that April and earned his wings in October and instrument rating in May 1945.

Bothwell was then selected as a flight instructor in the P-51 Mustang, achieving the distinction as one of the top instructors in air-to-air combat. The war came to a close, and Bothwell was assigned to the Army Air Force Reserves, which in 1947 became a separate branch of the service known as the U.S. Air Force. Vern served in the reserves until 1957. 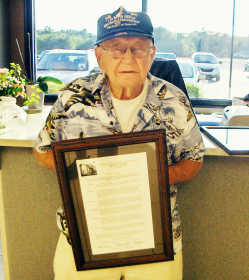 Upon separation from the service, Bothwell retired as a first lieutenant. The entire time previous to the reserves he was never a commissioned officer, preferring to remain an enlisted man, serving as a flight officer. A modest man, those that know Bothwell consider him a hero.

"I was just doing my job," he says. "The real heroes are those guys that never got a chance to come home."

In civilian life, Bothwell earned his Private Pilot's License, Aircraft and Engine Certificate (A&E), and Inspection Authorization Certificate (IA). He has amassed more than 4,500 hours of flight time in multiple types of aircraft.

A small celebration was held at the Putnam County Airport where many of Bothwell's family and friends gathered around him and presented him with well wishes and birthday cards.

He also was presented with one present that only a few knew about. With the blessing of the Putnam County Board of Commissioners and the Board of Aviation Commission, Bothwell was given a place of honor at the local airport. The asphalt lane that runs from Ballard Lane to the small white block building known as the Fixed Base Operations Center, or FBO, was named as Vernon Bothwell Sr. Lane.

No governmental funds were spent on the project as the cost was offset and the work done by Bothwell's friends.