Life on the farm is something common to each member of the new state officer team, including new state FFA secretary Katherine Spencer of South Putnam.

For Mann, the state president's office is something she's admittedly had her eye since her freshman year in the Cloverdale High School FFA chapter.

"It's always been something I thought would be such a unique opportunity and a once-in-a-lifetime experience and great chance to give back to this organization," she said.

"More specifically this year I really thought about it and decided that this is definitely what I wanted to go for, and I'm just so blessed to have this opportunity and to be here today."

Mann lives on the farm where her family has longtime involvement in hog and grain production.

"In high school I was very active in all the school clubs," she said. "I was in student council and I was the class president, and I was also involved at the county level with the 4-H program. 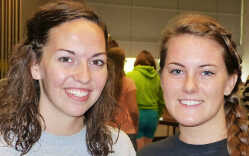 "And we have a Putnam County Youth Philanthropy Committee, which does some charity work and gives out grants for community service. Those are some of my favorite activities."

South Putnam's Spencer is happy to be serving alongside Mann as Indiana's state FFA secretary.

"Cameron and I are from the same county and same district," she said. "We're good friends, and we're both excited to be serving together and representing our county.

"I grew up on my family farm," Spencer added. "We're a grain production farm on both sides of my family, and that's my farm experience. And I garden which is one of my passions."

After serving as FFA president for the next year, Mann plans to attend Purdue University to major in agricultural communication.

Spencer, meanwhile, plans to study nursing at the University of Indianapolis. She wants to work in a hospital emergency room initially and then go back to school to do medical research.